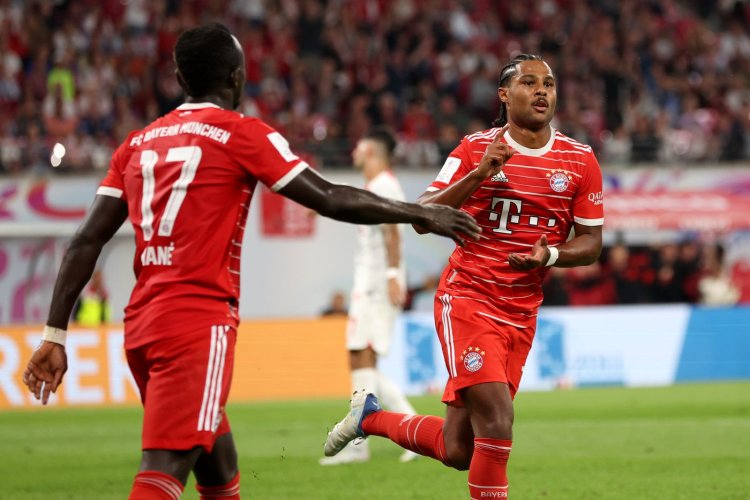 In just his second start for Munich, Tel became the youngest goalscorer for the club when he gave the German champions a 1-0 lead at halftime.

Tel is 17 years and 136 days, 69 days younger than the previous holder of the honour, Jamal Musiala when he scored against Schalke two years ago.

Tel broke Stuttgart’s stubborn resistance 36 minutes into the opening half, side-footing the ball under visiting keeper Florian Mueller after some superb lead-up work from Alphonso Davis.

Stuttgart looked to have equalised early into the second half when Serhou Guirassy swept the ball in from close range, but the goal was chalked off by VAR for a seemingly innocuous foul on Joshua Kimmich in the lead-up.

The visitors did not need to wait long to score their first, however, with Chris Fuehrich’s 57th-minute rocket giving Manuel Neuer no chance in goal.

Sensing resurgent energy in the visitors, Bayern quickly struck back through Musiala, now 19, who once again demonstrated his calm and assured presence, holding off two defenders to score his third of the season.

With one eye on Tuesday’s visit from Robert Lewandowski’s Barcelona, Bayern looked to take the energy out of the match, bringing on several changes and dominating possession, before a late foul from Matthijs de Ligt brought Guirassy to the penalty spot.

The Guinean slammed the ball into the top right corner of the net to give his side their fifth draw from six matches this season.

Bayern coach Julian Nagelsmann said his side only had themselves to blame.

“In the second half, we had three huge chances where you definitely have to score a third goal – and then the game would be over.”

“Today, I’m mad at ourselves for the first time this season. If we want to win, we need to go all the way,” Mueller said after the game.

“We need to take a look in the mirror.”

Stuttgart goalkeeper Mueller credited his side’s self-belief: “We didn’t give up. We believed that we could take a point.”

In Saturday’s late game, Schalke won their first Bundesliga match of the season with a 3-1 victory at home to Bochum.

Schalke’s Sebastian Polter, who moved to Gelsenkirchen from Bochum in the summer, scored his side’s third in injury time to inflict a sixth loss on Bochum in six games this season.

In Leipzig, one-time Dortmund coach Marco Rose secured a win against his former side in just his first match in charge, with a 3-0 victory.

Rose, who coached Dortmund to second in the 2021-22 season before being let go in favour of current boss Edin Terzic, was only appointed Leipzig coach on Thursday after the sacking of Domenico Tedesco.

While Dortmund started brightly, Willi Orban gave a jubilant Leipzig the lead after just six minutes with a towering header.

Leipzig’s Hungarian midfielder Dominik Szoboszlai made it 2-0 just before halftime with a swerving strike from outside the box, before former Chelsea striker Timo Werner set up Amadou Haidara in the dying stages of the match to give the home side a dominant victory.

Hoffenheim ran out dominant victors at home against a ten-man Mainz, with a 4-1 win to go to second on the ladder.

In Frankfurt, Wolfsburg recorded their first win of the season – and their debut Bundesliga victory under former Bayern coach Niko Kovac – with a narrow 1-0 victory over Eintracht.

Tipped as an outside chance for the title at the start of the season, Leverkusen could end the round as low as 17th depending on other results. (AFP)

Congratulations Emir Sanusi Lamido Sanusi for the emergence as the President (Hooreejo)...