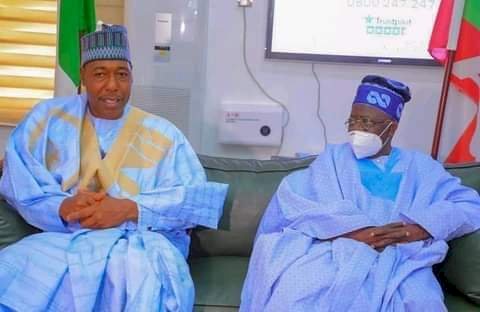 The national leader of APC and former Governor of Lagos State, Bola Ahmed Tinubu on Monday night visited Governor Babagana Umara Zulum in Maiduguri with call on the Nigerian military to change their strategy.

“In such situation what we do is to replan our strategy. We have seen the Governor’s life has been attacked more than one occasion in an effort to eliminate him but Allah is mighty, he has protected and will continue to protect you” Tinubu said.

Tinubu, who was on a sympathy visit to the Governor over the killing of farmers by Boko Haram insurgents, added that under insurgency governance would hardly excel.

“You can’t concentrate, become innovative and excel if you have to make educational development in fear. We saw people who have endured so much agony, denial, brutality decided to run to their farms to develop means of livelihood not only for themselves but for all of us, at the end, they were slaughtered.

“That’s not religion, it is not in our religion (Islam), it is not in Christianity either, it is an act of wickedness. I want His Excellency and members of the state executive to see this visit not as condolence only, not a sympathy only, but as solidarity and commitment that we must defeat all evildoers” Tinubu said.

Zulum combines talent and character
The APC leader commended Governor Zulum’s commitment to the security of the lives of the citizens.

“Professor Zulum… is a man of courage, brilliance, talented plus great character. Is a different thing for one to be talented, and another to have character. Zulum is a man who is talented combined with great character and courageously take the responsibility of governance without looking back. Confront evil, most unfortunate aspects of it is the fact that this is our country. I respect the Governor, he has so much courage and strong determination, he has been consistent, his voice is loud, he is the man, he is peace, stability and safety of lives and properties of not only people of Borno but the entire country.”

The APC leader advised that to deny evildoers from recruitment of vulnerable youth, government must come up with social protection measures that will take them off the streets.

“We have to remove these unemployed youth from the streets, from been available for evildoers for recruitment.  Don’t tell me they are illiterates, anybody that can operate Keke Napep and do little repairs, anybody that can hold guns, dismantle guns and service it is no more an illiterate”.

Governor Zulum, in his response, appreciated what he indicated was to him, a special visit by the national leader of the APC.

Zulum reiterated the commitment of his administration to doing whatever it can, towards protecting the lives and property of Borno people.