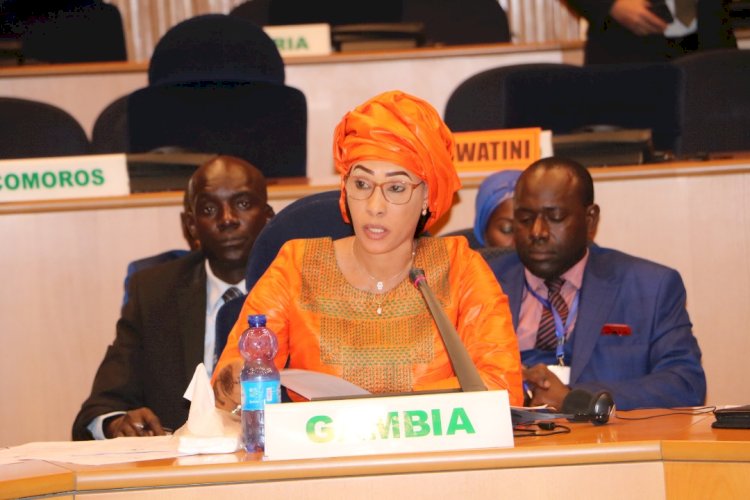 State House, Banjul, 11th February 2019 – Her Excellency, First Lady Fatoumata Bah-Barrow has been selected by the AU Commission as the Regional Chair for West Africa to lead the continent-wide efforts of ensuring a pollution-free Africa.

The choosing of the First Lady took place during the High Level Working Session on Banning Plastics in Africa, which was held on the sidelines of the African Union Heads of State and Government Summit currently underway in Addis Ababa, Ethiopia.

In this new role, the continental body would rely on First Lady Barrow’s wisdom and good office to spearhead the regional campaign to ban and eradicate plastics on the continent. Reacting to the news, the First Lady expressed excitement about the opportunities her new role would avail to add her voice to the global advocacy for a cleaner and healthier planet. She vowed to marshal all strengths in seeing the banning of plastic across Africa.

“As the Chair for West Africa, I am committed to the gradual eradication of plastics through advocacy and awareness raising on the impacts of plastics, and share experience on strategies and measures being undertaken to address the plight of plastics’’, she remarked, while showing appreciation to the Commission for the honour.

The African Union is concerned with the increasing pollution especially in the major cities of Africa, hence the campaign to see a pollution-free Africa. The world is swamped by harmful plastic wastes; an estimated 8 million tonnes of plastic ends up in the oceans, according to official reports. If the present trend continues, by 2050 our oceans will have more plastics than fish.

The Government of The Gambia is conscious of the health and environmental hazards associated with the growing demand for plastics, and remains committed to maintain the ban on plastic bags.

Sudan’s President Bashir steps down as head of ruling National...