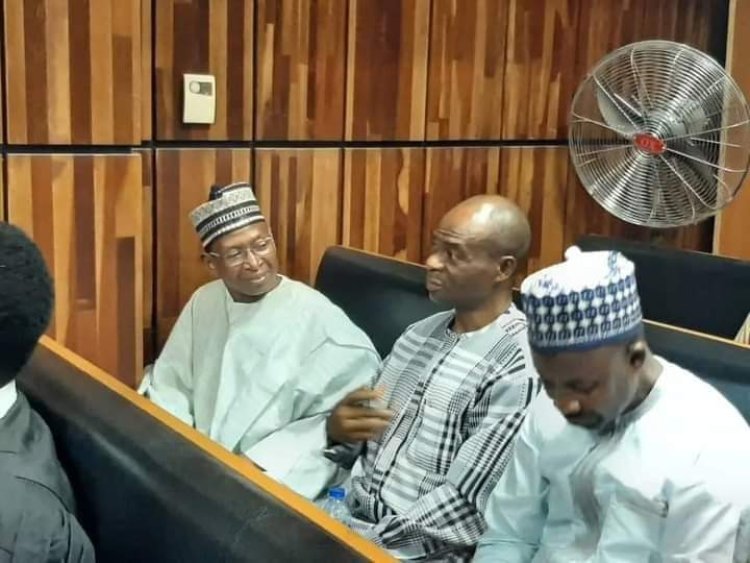 A former Accountant-General of the Federation, Ahmed Idris, and his co-defendants have arrived at the Federal Capital Territory High Court for the hearing of their bail application.

The defendants were brought to the court on Wednesday by officials of the Nigerian Correctional Service (NCoS) from Medium Security Custodial Centre, Kuje – where they were remanded.

Idris and others had pleaded not guilty to a 14-count charge bordering on stealing and criminal breach of trust to the tune of N109.5 billion, preferred against them by the Nigerian government during their last arraignment in court.

Other defendants in the case include Olusegun Akindele, Mohammed Usman, and Gezawa Commodity Market and Exchange Limited.

They were arraigned on Friday last week before Justice Adeyemi Ajayi by the Economic and Financial Crimes Commission (EFCC) on the charges.

But Idris and his co-defendants pleaded not guilty to the charges when they took their stand in the dock.

A Senior Advocate of Nigeria (SAN), Chris Uche, who represented the defendants urged the court to maintain the administrative bail granted to them by the EFCC.

He based his plea on the fact that his clients never breached any of the conditions by the anti-graft agency which he said has their international passports in its custody.

The prosecution counsel, Rotimi Jacobs, objected to the submissions of the defendants’ counsel, stating that the decision would send a wrong signal to the general public.

He added that the defendants only enjoyed administrative bail when the matter had not been brought to the court but now, granting them bail was at the discretion of the court.

After listening to both parties, the trial judge ordered that the defendants be remanded at the correctional facility in Kuje, pending the hearing of the bail application.

The matter was later adjourned to July 27 for the hearing of the defendants’ bail applications.