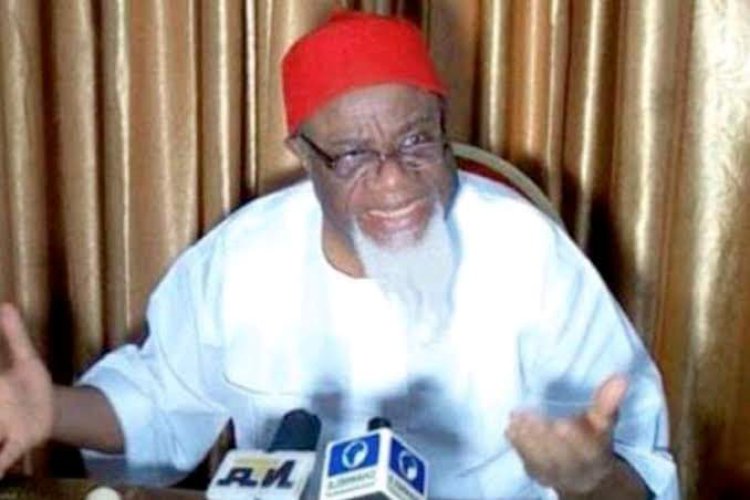 IECF Chairman and former Anambra governor, Chief Chukwuemeka Ezeife said this in Abuja while briefing journalists on the outcome of the Forum’s meeting where some “crucial national issues” were discussed.

There are indications that the ruling APC may field a Northern presidential candidate that can compete with the PDP, if the opposition party picks its standard-bearer from the North in 2023.

However, the Igbo Elders stated that the idea of another Northerner succeeding President Muhammadu Buhari is a direct invitation for the aggravation of crises, conflicts and separatist demands.

On the other hand, the Forum argued that ceding the presidential tickets of the two major political parties to the south-east would permanently heal the wounds of the civil war, which they said, were responsible for the gross marginalisation of the Igbo in the country’s scheme of affairs.

Ezeife said: “The Igbo Elders met and discussed diligently some crucial national issues, including the zoning of the 2023 Presidency to the South that have far reaching consequences on the stability, peace, unity, progress and development of Nigeria, and came up with the following resolutions:

We maintain our unalloyed support for the demand of the Southern Governors Forum, the Southern and Middle Belt Forum, the Afenifere, the Niger Delta Forum, Ohanaeze World Wide among other credible stakeholders and organizations that all political parties in the country should zone the 2023 Presidency to the South and possibly micro-zone it to the South East for the sake of justice, equity and fairness.

“The Igbo Elders want Nigerians and the whole world to note that the existence of Nigeria as a corporate entity may be seriously threatened by any attempt to deny the South, especially the South East the opportunity to produce the next President in 2023.

“In 2015, the Northern Elders and other organizations reminded Nigerians of the zoning principle and insisted that it was the turn of the North to produce the President.

“Even in 2019 Presidential elections, our people voted massively for both APC and PDP that had two Northerners as candidates, Gen Muhammadu Buhari and Alhaji Atiku Abubakar, respectively in keeping with our general belief that it was the turn of the North.

“Therefore, we are totally against, in whatever guise and eloquence, the idea of another Northerner succeeding General Buhari because it is a direct invitation for the aggravation of crises, conflicts and separatist demands by various sections of the country, among other unimaginable violence.

“Nigeria cannot afford to be changing the goal post in the middle of the game because of its unimaginable social, economic and political consequences,” the Forum added.

The Igbo Elders also threatened heavy sanctions against any Igbo politician that would accept to be presidential running mate to any person.“

Ezeife also said, “It has come to our notice that some of our sons and daughters are colluding shamelessly with some unreasonable and dishonest Nigerians to sabotage our collective efforts to produce the next president of Nigeria of the South East extraction.

“For the avoidance of doubt, the Elders Consultative Forum will pursue to a logical conclusion the sanctions of these shameless renegades and bootlickers, who plan to accept to be running mates to any presidential candidate not from the South as well as those who are working hard to sabotage our efforts masquerading as coordinators and promoters of presidential aspirants outside the South East zone. The Forum will also curse them and their families publicly.”

The Forum told the Igbo politicians from the South-east region jostling for the presidency in 2023 not to be distracted by the alleged plots by the APC and the PDP to scheme them out of the race.

Ezeife further said: “We encourage the presidential aspirants from the South East to remain resolute, persistent, focused, painstaking and close-ranks until victory is assured.

“Igbo Elders are with you and are prepared to work with you in liaison with Ohanaeze World Wide and other patriotic Nigerians to ensure that the right thing is done, that is the emergence of Nigerian President of South East extraction in 2023.”