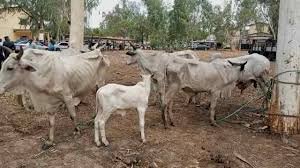 On Wednesday 20 of May 2020 11 cows recovered from serving Councillor in Adamawa State Nigeria.

The Adamawa State Police Command said it had recovered 11 stolen cows from a serving councillor in an ongoing cattle rustling investigation.

DSP Suleiman Nguroje, the Command’s Public Relations Officer, said while handing over of the cows to their owners on Tuesday in Yola that the suspect was cooperating with the police in its investigation.

“Eleven cows so far recovered from the councillor and his cattle rustling cohorts.

“The command, however, handed over the cows to the leadership of Pulaku Njonde Jam, Adamawa State Chapter, on bond on behalf of the original owners.”

Nguroje said investigation was ongoing to recover more cows, including those recently rustled at Mbemum village.

Speaking shortly after receiving the cows, Alhaji Ya’u Isa, State Chairman of Pulaku Njonde Jam, thanked the Police Command and Adamawa State Government for their quick intervention and recovery of some of the stolen cows.

Isa said within one year, Fulani herders had lost no fewer than 450 cattle and 240 sheep to cattle rustlers in Numan and Lamurde LGAs.

He said: “We discussed the issue with the state Deputy Governor, Seth Crowther, on how to bring lasting solution to the problem and restore peace in the affected areas.

“We are confident government is making efforts from its side to ensure peace reigns in the state.

“However, government and the security operatives have to do more in dealing with the elements who are behind cattle rustling in the state.”

Narrating his level of involvement, the councillor said he sold the cows to one Adamu Numan, a butcher and a cow dealer in Numan town, who is also in detention.

Ngari confirmed that the police recovered five of the stolen cows he sold to Numan, claiming that the animals were given to him for sale by his brother.

“This is not the first time I have been buying cows from Makana Ngari,” Adamu told the police.