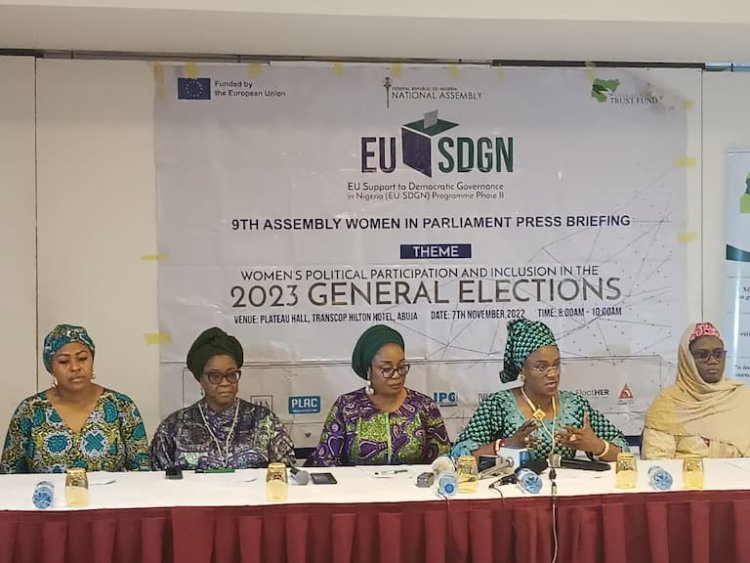 Ahead of the 2023 general elections, Nigerian women have been urged to vote their female counterparts into key positions.

A member of the House of Representatives for Irewole, Ayedaade and Isakan constituency of Osun State, Taiwo Oluga, made the call on Monday in Abuja at the 9th assembly women in parliament press briefing, themed, ‘Women’s Political Participation and Inclusion and 2023 General’.

Oluga, who is the Chairperson, House Committee on Women in Parliament, said with more women in key governmental levels at the various states of the federation, women and gender issues can be changed at the national level.

According to the representative, if nothing is done concerning having women in key positions who will drive the cause of gender, multiple meetings will keep reconvening on the same issues.

She said for the 2023 Senate elections, out of the 1,101 candidates contesting for 109 seats, only 92 are women, while 1,009 are men, adding that the women represent only about 8% of Senate contestants.

“The question is, of the less than 8% women nominated for elective offices in 2023, how many women would emerge victorious at the General Elections? The point is that even if all these women win their elections, the figure remains very low and a cause for serious concern and action.

“Another question is, is there a taboo barring women from vying for the highest decision making position in Nigeria that is the position of the President of the Federal Republic of Nigeria? This is because, out of all the 18 political parties in Nigeria, only the APM (Allied Peoples Movement) fielded a female Presidential Candidate.

“It is interesting to note that Kano State, Sokoto State, Taraba State, Yobe State and Zamfara State do not have a single female candidate nominated for the Presidential and National Assembly Elections next year. The Implication of this is that, even before next year’s elections in Nigeria, it is crystal clear that 13.5 percent of States will not have women in Elective offices in their National Assemblies.

“This a huge setback in attaining 35 percent affirmative action in elective and appointive offices in Nigeria.

“The House Committee on Women in Parliament shall forthwith step up its activities with Development Partners, Non-Governmental Organizations, Religious Institutions and the Traditional Institutions on the need to discourage religious beliefs, cultural practices that discourage women political participation in Nigeria.

“Also, efforts shall be directed to increased synergy with NGOS and deployment of Social Media to accelerate advocacy and funding of Women Economic and Political Causes.

“We hereby encourage the Nigerian Electorates to Vote for Women enmasse in the forthcoming elections, because women are more humane and feel the purse of their children the most.

“Women and children, being the worst hit by terrorism, insecurity and poverty, are in a better position in proffering enduring solutions to these societal Scourges.

“Women are advised to quit the ‘Pull Down Syndrome’ and support each other in the forthcoming elections.

“The Committee hereby uses this Press Briefing to call on all women to collect their Permanent Voters Card and come out enmasse to vote in the forthcoming general Elections.

“We call for more participation of women in the political process and demand that a lot more women be considered for strategic appointive offices in 2023,” she said.

ASUU: Gbajabiamila Calls For Calm Amidst Half Salary Controversy