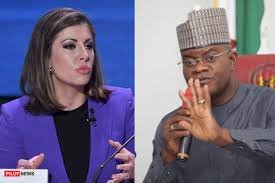 Kogi State Government has kicked against the recent visa ban imposed on politicians alleged to have rigged the November 2019 election in the state by the United States of America .
The US Government had on Monday slammed a visa restriction on some individuals for allegedly rigging the November 2019 governorship elections in Kogi and Bayelsa States as well as in the run- up to the September and October 2020 Edo and Ondo governorship polls .

But in a letter addressed to the Ambassador of the United States of America signed by the Secretary to the Government of Kogi State , Mrs Folashade Arike Ayoade , the state governor , Alhaji Yahaya Bello , said the US should have created room no matter how slim for a fair hearing .

In the letter titled , “ Re : Visa Restrictions On Individuals And Inclusion Of The 2019 Kogi State Gubernatorial Elections In US State Department List Of Allegedly Compromised Elections – A Letter Of Protest ” , Kogi State Government also urged the US to accord greater empathy, more civility and much less disruption to nascent democracies .

The letter read in part , “ The Kogi State Government became aware of a United States Government list of individuals who received US visa restrictions for alleged electoral malpractices via a Press Statement to that effect posted on your Embassy website.

“ In your own words , the still – unnamed individuals are cited as guilty of ‘ acts of violence , intimidation , or corruption that harmed Nigerians and undermined the democratic process . ’ They are also alleged to ‘ have operated with impunity at the expense of the Nigerian people and undermined democratic principles and human rights .
“ You also noted in the statement that the sanctions are derived from unspecified misconducts by the said individuals which extend from the February / March 2019 General Elections in Nigeria through the off- cycle November 2019 gubernatorial elections in Kogi and Bayelsa to the as yet unheld governorship contests in Edo and Ondo States . Please note that for the purposes of this protest letter we are only interested in the citations to the extent that they are referable to Kogi State and her citizens .

“ For the most part , we concede that elections in Nigeria are complex affairs which will continue to require improvements for the foreseeable future . The 2019 Kogi State Gubernatorial Election was also not without its challenges . However , it is also crystal clear from critical and composite analyses of the records ( official , media , observers , etc ) of the November 16 , 2020 polls that regrettable incidents were limited to a few polling units , while the overwhelmingly larger portions of the ballot were free , fair and credible. ”

Governor Bello maintained that in line with Nigerian law , the few political parties and individuals who alleged widespread electoral malpractices had free rein to contest the outcome in court .

According to him , they vigorously litigated their claims over a grueling 9 -month period , through a 3 – step hierarchy of courts , to the inescapable conclusion at the Supreme Court of Nigeria that the said elections satisfactorily complied with the Nigerian Constitution and the Electoral Act.

He continued , “ Our concern right now is not the prerogative of the United States of America to impose entry restrictions on anyone , for any or no reason at all, which prerogative remains unfettered , but the room for atrocious misinformation which the timing of your Press Statement and the mention of the Kogi elections therein has created in our state .

“ For the February and March 2019 General elections , your advisory came out in July 2019 , long before the Supreme Court delivered her judgments in the petitions against those elections , including challenges to President Muhammadu Buhari ’ s reelection . The presumption is that in spite of your intervention, the Supreme Court still discovered no merit in the petitions and dismissed them accordingly .

“ In our case, ie , Kogi State , you made the tactical decision to release the update shortly after the Supreme Court delivered judgments in the 4 petitions which made it before her .

Amongst a plethora of well -reasoned pronouncements the Apex Court dismissed the said petitions for failing to prove their allegations and for having no ‘ scintilla of merit ’ . The inference from your timing is that the judgment is somehow tainted and did not meet the justice of the case, thereby casting aspersions , not only on the Nigerian Judiciary, but on the second term mandate freely bestowed on His Excellency , Governor Yahaya Bello by the good people of Kogi State .

“ We find this unacceptable , and we protest your presumption . The least you could have done , if indeed this is about democracy and human rights as claimed is create room, no matter how slim , for fair hearing . As it is now , partisan speculations as to who is indicted , who is not and for what , has become cudgels , furiously swung in the media space by all comers . Your action has therefore added abundant grist to the rumour mills and electrified the merchants of fake news ” .

He further noted that other players in the state ’ s political space , including candidates and officials of opposition political parties which lost the elections and could not prove their allegations in court have now latched onto the US visa ban , holding media conferences and making press releases , claiming that the United States has justified their wild allegations and conspiracy theories where the courts and the administrative quarters failed . This , according to him is is utterly regrettable .

He stressed that the governor is not challenging the visa but was only registering the strongest protest as a state to the collateral and unwarranted interference its political and social processes which it represents .

“ We believe that if the United States of America , despite her commanding heights and much longer experience as the acclaimed Bastion of Democracy in the world , is still locked in a fight to defend the integrity of her own electoral processes to this very day , then she ought to accord greater empathy, more civility and much less disruption , to nascent democracies” , the letter further noted

Gambia to play friendly against Congo