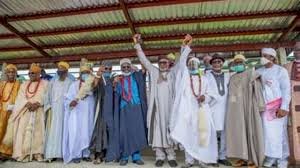 Traditional rulers in Akoko land have adopted Governor Oluwarotimi Akeredolu SAN, as the sole candidate for the October 10, 2020 governorship election.

The Olubaka of Oka, Oba Yusuf Adebori Adeleye who spoke on behalf of the Akoko Monarchs during the occasion of the Conference of Akoko Obas explained that the Conference otherwise called “Pelupelu” was synonymous with Akoko Unity and togetherness vigorously used to forge required peace, unity and understanding.

The Akoko Obas noted that the traditional institutions in Akoko land have greater role to play in appreciation of the Governor’s provision of dividends of democracy to the people.

The monarchs maintained that apart from the massive repair carried out on the Owo-Ikare road, Oke-Alabojuto, Iwaro-Oke Oka, and other roads in Akoko, the rate of accidents occasioned by these bad roads had been brought under control.

They said the people of Akoko are also mindful that the Akeredolu administration has upgraded health facilities in Akoko, renovated and also constructed reasonable number of classrooms in the public primary Schools across the state and Akoko in particular.

The Monarchs also appreciated the Governor for creating an enabling environment for farmers in Akoko unlike in the past when farmers were displaced and their farmland destroyed by the immediate past administration of Olusegun Mimiko.

The Monarchs equally commended the Governor for championing the establishment of the Amotekun security outfit to curb menace of the undesirable element terrorizing the area.

“We wish to recall the high regard that Mr. Governor and the office he represents have for our cultural and traditional institutions that Kabiyesi must always remain seated on his entering into any public gathering because it was never in his character to do otherwise” the Monarch said.

Governor Akeredolu thanked the monarchs, while assuring them that his administration will always attend to the welfare of the people of the state.