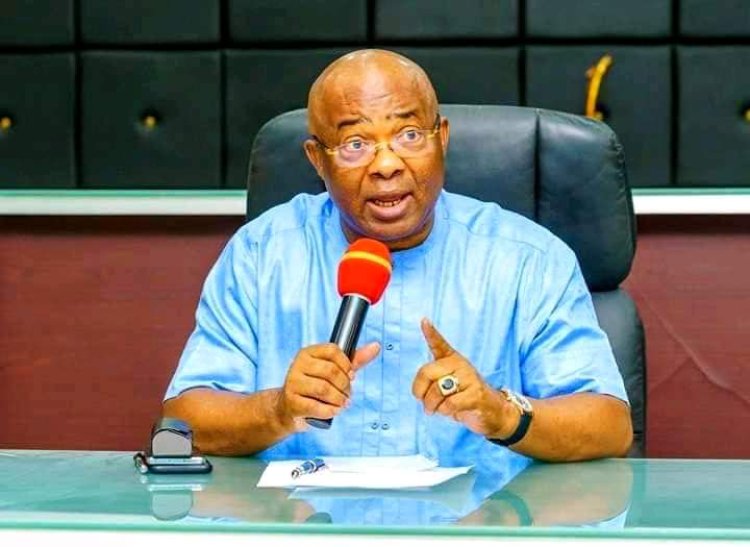 The Imo State Governor, Hope Uzodimma, on Tuesday said God would punish those who were behind the incident that led to the killings and burning of houses in the Izombe community in Oguta Local Government Area of Imo State, last Friday.

Uzodimma said this when he visited the Izombe community to see for himself the level of damages caused when the military clashed with a group led by a suspected Owerri prison escapee, whose name was given as Obele. An incident that led to the dead of Obele and two military officers.

■ 2023: ‘Northerners Paid Your School Fees , Your Allegiance Is To Them ’, Ohanaeze Slams Dokpesi

The governor said he was in tears after he moved round to see for himself the extent of the damages. However, he said he would constitute a committee to commence the process of assisting in rebuilding the houses.

He also gave a seven-day warning to the youths in the area with weapons to return those weapons. He advised parents to talk to their children to avoid trouble.

As captured by Vanguard, “I am shedding tears. I am shedding tears because the properties of my brothers and sisters suffered to built we’re burnt. I would not have been a Senator without the kind of support I got from Izombe.

“I take Izombe as Omuma, my home town. It is painful all our sufferings, struggle and God answered our prayer. It brought us blessings. Instead of us continuing to see blessings we are seeing obstacles. God will punish those behind all these things happening.

“Why we gave birth to these children is to grow and be useful to us and that they will listen to our advice. Let us advise them and what I want to tell you people what happened will never happen again. We can’t suffer for years and waste all we laboured for in the past. Just because of one foolish person. We will never allow it to happen again. I have seen how the houses were destroyed and our people abandoned their homes.”

“I want to ask are we in war? Not now that I am the governor what my governorship has come to do is to bring development and not destruction. I will send a committee to come and look into all the damages so that we can assist in repairing the damaged houses. I give the youths of Izombe, seven days to return weapons in possession. I want to say this, I will disappoint my enemies and Imo state will continue to move forward,” Uzodimma said.

Vanguard has been following the incident, It should be recalled different narratives were painted around the story one of which was that the villagers were the ones who invited the military officers because of security threats to their lives, while the military officers were trying to arrest the suspect, Obele, he resisted and wanted to use the gun on the military men before he was killed by the soldiers.

This did not go down with the gang members of the suspect who attacked and killed two military officers, took their arms and ammunitions including their army uniforms.

Another story told Vanguard was that the boys who attacked the military officers were because the soldiers were trying to stop them from smuggling petroleum products.

Senegal and Morocco through to World Cup playoffs