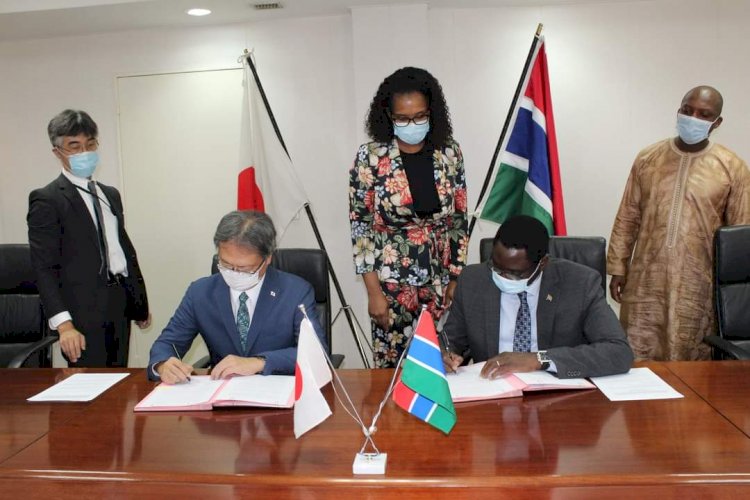 Banjul: 20th November: The Honourable Minister of Foreign Affairs, International Cooperation and Gambians Abroad, Dr. Mamadou Tangara, on Friday signed an exchange notes for the delivery of Japanese food assistance worth one hundred and twenty five million dalasi (D125M) to The Gambia for 2020.

Speaking at the ceremony held at the Embassy of Japan in Senegal, Foreign Minister Dr. Tangara thanked the Government of Japan and described the gesture as thoughtful and kind. He said the food assistance is crucial and means a lot to the country’s post Covid– 19 reconstructions and would address key priorities in the National Development Plan (NDP).

Foreign Minister Tangara assured the Japanese side that proceeds generated from the food assistance would be earmarked for intervention in great projects that directly address challenges such as health, education and other social services central to the NDP of the Government.

Foreign Minister Tangara added: “I am pleased to recall your country's participation in the realisation of projects and programmes in the most important sectors of our development, notably in the areas education and vocational training, agriculture, fisheries, health and water management, as this is evident with the recent signing here of the Project for Rural Water Supply Phase IV worth about 770 million Gambian Dalasi.”

This, the Foreign Minister added shows generosity and genuine solidarity which are defining characteristics of the Japanese people. Minister Tangara said the Government of The Gambia, under the leadership of His Excellency Adama Barrow, recognises with appreciation, Japanese government’s enormous contributions towards the strengthening of bonds of solidarity, friendship and cooperation between the two countries.

For his part, the Ambassador of Japan, his Excellency ARAI Tatsuo, said the Government and people of Japan are pleased to make the gesture to The Gambia. Ambassador Arai said the project consists of purchasing rice to help cover the local food demand.

He adds that quality and sufficient food for all are important for health, social and economic especially in the context of COVID 19.

Health, he disclosed, is one of the pillars his Government supports - “Africa Health and well being Initiative” and the “Initiative for food and Nutrition Security in Africa (IFNA). In his conclusion, Ambassador ARAI said food security is essential to the improvement of public health and human security.

On the heels of the signing ceremony, Foreign Minister Tangara and Ambassador ARAI also held talks aimed at further strengthening bilateral relations between the two countries.

Killings in demonstrations:Macron called on to "work so that investigations are...

President Adama Barrow received the Minister of State for...