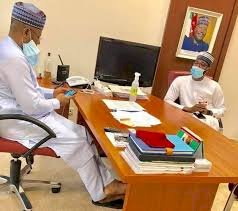 The Chairman Senate Committee on Tertiary Institutions and TETFUND Distinguished Senator Ahmad Babba Kaita today summoned the Permanent Secretary Ministry of Education and the Director Federal scholarship board to provide convincing answers to the alleged Lopsidedness in the distribution of the 2020/21 scholarship to the six geopolitical zones of the country.

Responding to the claim, the Permanent Secretary Ministry of Education, Architect Sunny Echono debunked the allegation asserting that the purported list which has gone viral on the cyberspace was an application names which thereafter provided the summary of the 2020 Scholarship Distribution by geopolitical zones as follow;