The appointments come after several calls for the sack of former chiefs... 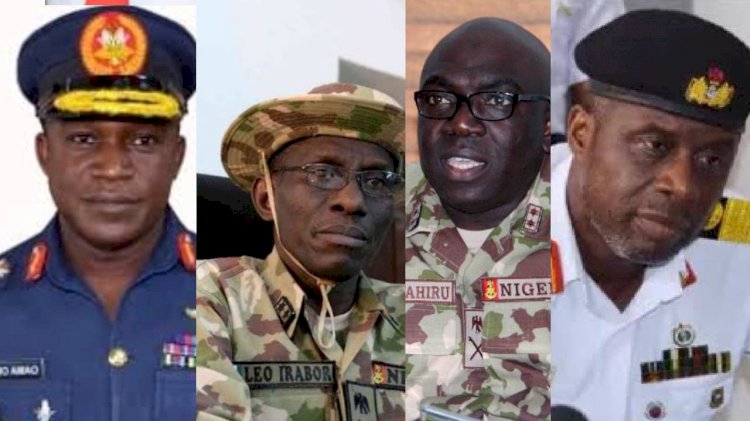 President Muhammadu Buhari has appointed new service chiefs, long after rising clamour calling for the sack of existing ones.

A presidential spokesman, Femi Adesina, in a statement issued on Tuesday, said the appointment followed the acceptance of immediate resignation of the former service chiefs, and their retirement from service.

Adesina took to Twitter to announce the new appointments.

He said President Buhari thanked the outgoing service chiefs for what he called their “overwhelming achievements in our efforts at bringing enduring peace to our dear country” and wished them well in their future endeavours.

The President equally congratulated the new service chiefs, and urged them to be loyal and dedicated in the discharge of their responsibilities.

It would be recalled that various stakeholders in the country had called for the sack of service chiefs before the President finally took the decision.

The calls for their sack followed a spate of insecurity in different parts of the country, especially in the northeast, and the seeming failure of the security agencies to contain it.

In December 2020, the Senate called for a second time for the ousting of the service chiefs after hundreds of farmers were killed on their farms in Borno.

The attack has come to be dubbed the Borno massacre.

On the same day, a cross-section of elders across the country under the aegis of Coalition of Nigeria Elders for Peace and Good Governance (CONEPAGG) urged President Muhammadu Buhari to immediately sack the nations service chiefs and replace them with more capable hands.

Analysts have questioned the continued stay in position of the now-ousted service chiefs, citing that they had put in more than the years of service required by law and had all gone beyond retirement age.

Video:The sons of the Sarkin Fulani of Oyo State have narrated their ordeal after...