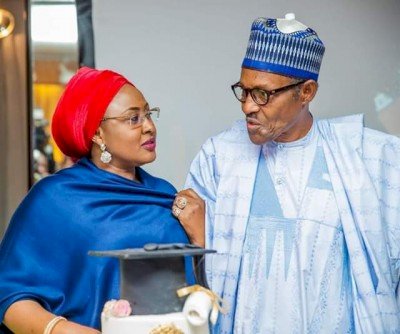 Aisha, wife of the President, Major General Muhammadu Buhari (retd.), on Tuesday opted to refer to her husband as “General” in her birthday message to Buhari who turned 77.

In a congratulatory message she posted on her Facebook wall and Twitter handle, @aishambuhari, Mrs Buhari decided to refer to the President as “GMB”, an acronym for General Muhammadu Buhari.

Others, including top government officials, who took to various social media platforms to congratulate Buhari, however, chose “PMB”, an acronym for President Muhammadu Buhari which the President’s handlers are more comfortable with.

Apparently, to make it clear that she did not use the acronym in error, Mrs Buhari wrote it twice in the short message.

It was not clear as of the time of filing this report why Mrs Buhari who has been calling out presidential spokesman, Garba Shehu; and her husband’s nephew, Mamman Daura, chose to prefix Buhari’s name with the General title.

She wrote, “Happy Birthday to MY incorruptible GMB. “I wish you Allah’s Guidance Protection and Good Health to continue steering the affairs of our dear nation .

Happy Birthday to MY incorruptible GMB.

I wish you Allah’s Guidance Protection and Good Health to continue steering the affairs of our dear nation .

Recall that PUNCH, had in a front page comment titled “Buhari’s lawlessness: Our stand” published last Wednesday,  assessed the President and stated that Buhari, who ruled the country as a military Head of State from 1983 to 1985, had failed to “wean himself off his military antecedents.”

The newspaper had said as a symbolic demonstration of its protest against autocracy and military-style repression, all its titles would henceforth prefix Buhari’s name with his rank as a military dictator in the 80s, Major General, and refer to his administration as a regime, until agencies of government purge themselves of “their insufferable contempt for the rule of law.”