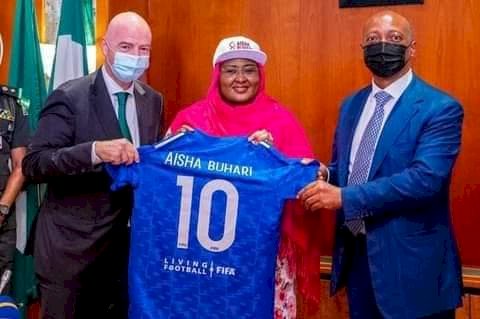 First Lady, Federal Republic of Nigeria, Dr. Mrs. Aisha Muhammadu Buhari has urged Nigerian girls to embrace football as a career path. She made the call while receiving the President of FIFA, Mr. Gianni Infantino at the State House on Thursday 16th September 2021.
Mrs. Buhari said the benefits of football spreads across the coaches, officials, and administrators on the one side, and to family members and the society on the other. With football, she said, we have an opportunity to influence and increase positive attitude towards gender equality and development. 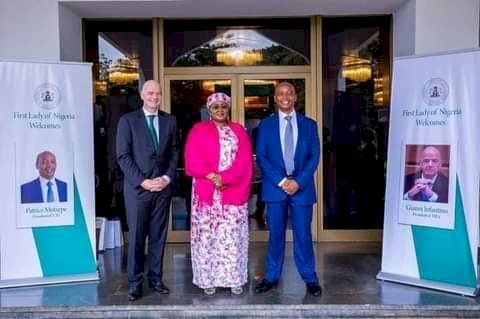 “I collaborated with the NFF to promote women football in Nigeria and worldwide through the Aisha Buhari Cup, to build on the gains achieved so far and to create additional opportunities for the girl-child. I, therefore, call on FIFA, CAF, and NFF to show more support and encouragement to female players both at local and international levels” she said.
She commended the President of FIFA for his support to women’s football and his participation at the event.
Earlier, the President of FIFA, Mr. Gianni Infantino commended the First Lady for the leadership role she is playing on the issue of women empowerment, saying that her energy is unrivaled. He commended the sense of organization in the tournament and expressed his belief that it will achieve its stated objectives.

Mr. Infantino further expressed strong conviction that the Aisha Buhari tournament will serve as a shining example of women empowerment worthy of emulation around the world, stating that it will also “unite the world a little bit more.”

Aliyu Abdullah
Special Assistant to the President on Media & Publicity
(Office of the First Lady)
September 16, 2021

IPOB: Yoruba Nation’ll Be Judged By Company It Keeps ― Presidency

BREAKING: CAN Suspends Gombe Chairman Over Congratulatory Message To Pantami

I’m Back Where I Belong. This Is For Alex Ferguson – Ronaldo...