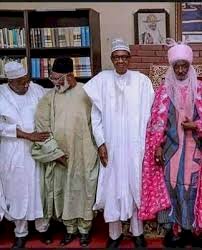 Abdulsalami Abubakar, former military head of state, is chairing the committee convened to intervene in the ongoing crisis in Kano state.

Kayode Fayemi and Bello Masari, governors of Ekiti and Katsina states respectively, are also members of the committee.

TheCable reported that Abdullahi Ganduje, governor of Kano, had taken steps to whittle down the influence of Muhammad Sanusi II, emir of Kano, ticking off a chain of reactions.

Ganduje created additional emirates in Kano, splitting the entire domain once under Sanusi. He also issued a two-day ultimatum to the emir to accept his appointment as the chairman of Kano state council of chiefs following a new emirate law he signed.

This was to compel Sanusi to accept the creation of additional emirates from his domain.

The governor also claimed he received a letter asking him to dethrone the emir if he fails to submit to the state’s authority.

In a statement on Sunday, Adamu Fika, the committee’s secretary, said the reconciliation was necessary to prevent the spread of the crisis to neighbouring states.

He said the committee is working with the cooperation of the federal government and in agreement with Ganduje and Sanusi.

“Against the background of the crisis in Kano, a matter that has since degenerated into serious tension with the state, with likely consequence on peace and security, and with the possibility of such spilling into neighbouring states, a group of elders, under the chairmanship of General Abdulsalami Abubakar, GCFR has been formed to intervene and bring about full reconciliation and effective resolution of the matter,” he said.

“The committee is working with the full understanding and cooperation of the Federal Government. Initial contact has been made with His Excellency the Governor of Kano, Dr. Abdullahi Umar Ganduje, as well as with His Highness the Emir of Kano, Sarki Muhammadu Sanusi II. They have each agreed to hold back from taking any further actions until the Committee has fully undertaken and finalised this exercise of reconciliation and resolution.

“Similarly, they each have undertaken to call on all their supporters and sympathisers, including social media operators, to refrain from making statements, declarations, songs, articles, blogs and all actions inimical to the spirit and process of good order, reconciliation, and good governance. We call on everyone to hearken to this call.”