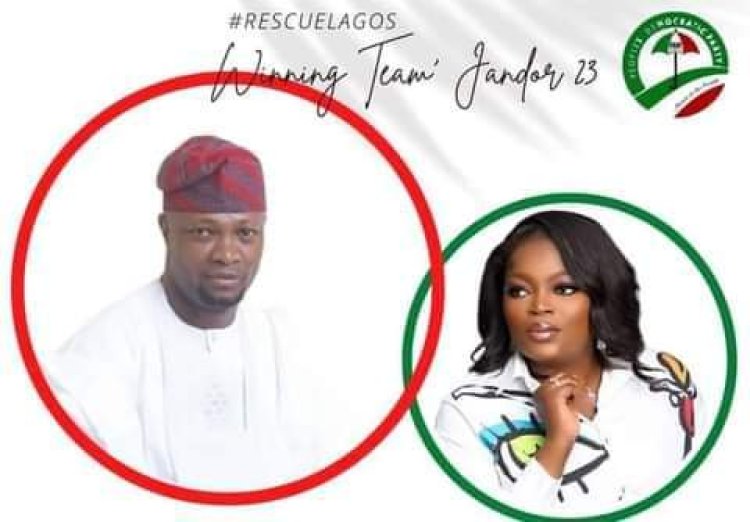 A picture of Jandor and Akindele had gone viral on Friday, suggesting that the Nollywood actress had been chosen as the deputy governorship candidate.

However, checks by our correspondent indicated that the actress was only nominated as a potential running mate while the decision on who will run with the governorship candidate is yet to be taken.

A committee has been set up to screen the aspirants and come up with the most suitable candidate to be the running mate to Jandor.

As of the time of filing this report, a meeting of stakeholders of the party is ongoing to select one of the nominees.

We learnt that two of the shortlisted candidates – Rhodes-Vivour and Kolawole – are from Lagos West, the same senatorial district with Jandor, hence reducing their chances.

Yeye Shobajo and Funke Akindele are from East while Balogun is from Lagos Central.

A source said there is a strong case being made for a woman to be shortlisted as the running mate.

A chieftain of the party who spoke with our correspondent on the condition of anonymity said consultation is ongoing to nominate the most suitable aspirant.

One of the criteria being considered, he said, was the clout of the potential candidate.

Bandits Kill Farmers In Sokoto, Impose Levy On Others

I, Makinde, Ortom, Ikpeazu, Ugwuanyi Are Bedrock Of PDP...