Alhaji Atiku Abubakar, Presidential Candidate of the Peoples Democratic Party (PDP), has vowed to lead Nigeria out of darkness if elected in 2023.... 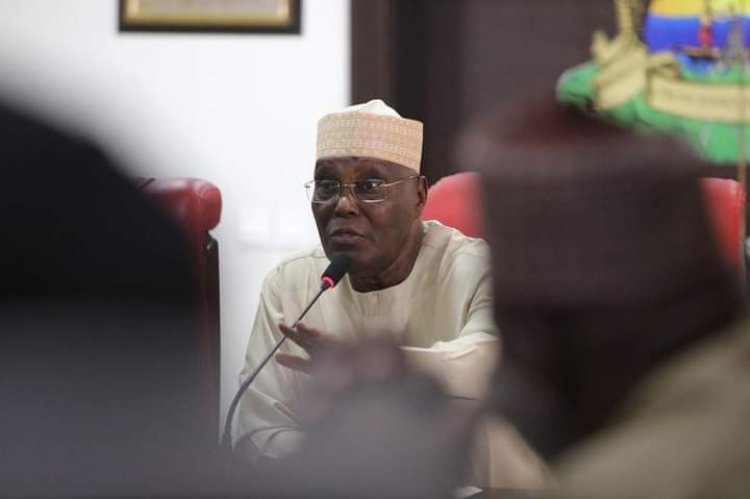 Atiku said this while presenting his economic blueprint for Nigeria at the Private Sector Economic Forun on the 2023 Presidential election organised by the Lagos Chamber of Commerce and Industry (LCCI).

He also advised Nigerians not to allow political slogans to take the place of developmental plans, stressing that political propaganda on Facebook, Twitter and Instagram is never a substitute for proper social, economic and political agenda.

“In all my love endeavours, whether as a businessman or as a public officer, I have always natured the desire to create abundant opportunities for people and enhance their capability so that they live a happy, healthy, productive life. There is nothing I enjoy, like making you rich

“When I create opportunity, I don’t envy and I don’t jealous. Creating economic opportunities for Nigerians will represent significant implication for social cohesion and national security. Economic prosperity is an integral part of my five point agenda, soon to be officially unveiled that seeks to restore Nigeria’s unity, strengthen national security to foster economic prosperity, and education for delivery and restructure. My government will take strategic steps  to heal and rebuild the economy of our dreams. I will lead Nigeria out of darkness.”

While reeling out his plans, Atiku lamented that Nigeria’s economy is crawling rather than growing.

According to him, Nigeria is being dressed in borrowed robes.

He said Nigeria under APC led government has consistently run on budget deficits since 2015.

“For the first time in Nigeria’s history, the Federal Government paid more in debt service than it earned by spending more than 100percent of its revenue for debt service. Nigeria is breaching one of the applicable debt sustainability thresholds. The APC led government is dressing Nigeria in borrowed robes,” he restated.

“Nigeria’s GDP grew at an average rate of less than 1% since the APC assumed power in 2015.  Compare this with an average growth of 6.5% in seven years earlier. For capital income, a measure of citizen’s  well being has progressively fallen since 2015 because of declining output and a fast growing population. Nigerians are worse off today than they were in 2015.

“Job loss ,declining purchasing power of per capita income and lack of citizens access to basic amenities have pushed more than 90million people below the poverty line and created more misery for the poor in towns and villages.”

Atiku Will Welcome Shekarau Back To PDP On Sunday, Says...