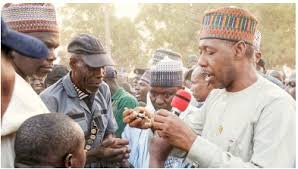 Governor Babagana Umara Zulum is marking the Christmas season in the southern part of Borno State.

Governor Zulum, in his Christmas message, wished all Christians a joyous and memorable festival while reassuring that he will not relent in his aggressive and multi-stakeholder efforts to secure lives and properties.

“I wish my Christian brothers and sisters in Borno State a happy and memorable Christmas celebration and I reassure all citizens that we will not relent in providing good governance, particularly on security. We are working round the clock engaging and supporting our military and other security components; continually recruiting, equipping and mobilizing thousands of eligible volunteers in civilian JTF, hunters and vigilantes and deploying them to all corners of Borno State. We will not sleep until Borno fully regains peace by the grace of God”, Zulum quoted by his spokesman, Malam Isa Gusau, said in a statement issued on Christmas morning.

Zulum also directed the execution of eight projects that include three on education: construction of new classrooms and rehabilitation of existing ones in Sabon Gari Primary School; Chul central Primary School and Magum Wamdio Primary School.

The Governor also directed five additional projects: rehabilitation and provision of medical equipment to Lassa General Hospital, construction of deep aquifer borehole for affordable water supply in Lassa, and Chul; the restoration of electricity to Lassa and  the deployment of measures to control problems of erosion also in Lassa.

In addition to projects already directed in the listed towns and villages he visited, Governor Zulum also promised the people of Askira-Uba that government would construct roads and drainages in Askira town which is headquarter of the council.

His Excellency, President Adama Barrow has called on the leaders of the regional...