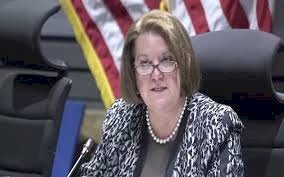 The visa ban placed on Nigeria and other countries was a temporary measure, the United States (U.S.) said on Tuesday as the U.S. Ambassador to Nigeria, Mary Leonard, said the issue could be resolved if the conditions that necessitated the ban are met by the Federal Government.

She listed information sharing goals as one of the terms that must be fulfilled before the U.S. government can reverse the ban.

Speaking during a visit to Labour and Employment Minister Chris Ngige in Abuja, the envoy said the ban was based on her country’s concerns over the need for information sharing and not about character definition.

She, however, reiterated that students visa were not included in the ban and that the people who are resident in the U.S. were excluded from the immigrant visa ban.

“What Secretary Pompey said was something that was meant to be temporary. And it is about problems with information sharing, which are investigable, achievable and resolveable, and we look forward to Nigeria in a very short time being able to meet those information sharing goal so that the decision can be reviewed.”

Noting the industrious endowment of Nigerians at home and abroad, she said the country has the ingenuity to diversify the economy.

Noting these as ingredients to be employed to tackle unemployment, she said: “I think for Nigeria, you have an interesting story about diversification of your economy and prosperity of your economy and it is people. You know Nigerians are so well known at home and abroad for their industriousness.

“You hear about how much of the activity in the informal sector. So, I wonder how you think about capturing that entrepreneurial spirit and to bringing it into the formal sector in service and to enhance employment.”

The minister described as shocking the inclusion of Nigeria in the list of countries under the U.S. travel ban. According to Ngige, the ban was unwarranted because of the contribution of Nigerian professionals to the U.S. economy.

He said: “Some of these Nigerians are medical doctors, engineers and people with high level of proficiency in oil and gas fields.

“They were all part of the Nigerian residents in the U.S. and it came to us as a rude shock when the U.S. government banned Nigerians and put us in the list of those countries whose residency status been cancelled.”

Ngige urged the U.S. ambassador to discuss the visa ban issue with her home government in order to reach an understanding and have it reversed.

The minister told the U.S. ambassador that more than 70 per cent of Nigerians living in the U.S. were highly skilled professionals who contributed billions of dollars yearly to U.S. economy while sending equally impressive amount to Nigeria.

He used the opportunity of the visit to seek for collaboration and assistance of the U.S. in the area of poverty eradication and child labour, stating Nigeria will rather seek other forms of assistance that demand for money from the U.S.

“We call on US to help us build schools in those areas where child labour is endemic. You also help in setting up clinics and executing its own empowerment programmes in those localities.”

#EndSARS: Senate urges Intervention of all Nigerians to...