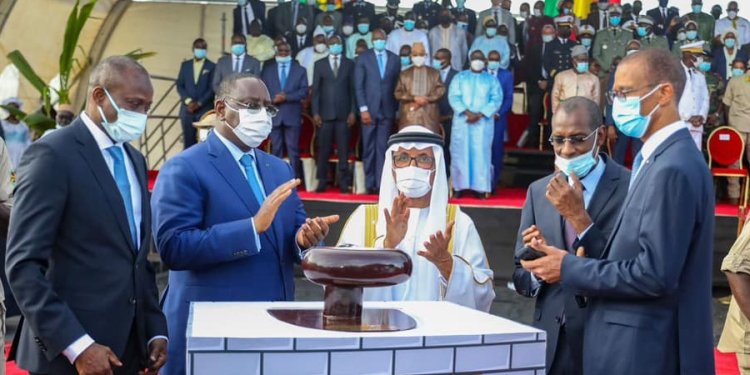 With the launch of a multimillion-dollar deep-water port project earlier this week, Senegal took a giant step towards its goal of becoming the economic hub in the Economic Community of West African States (ECOWAS).

At the heart of this plan are ambitious infrastructure projects.

The deep-water port construction project, estimated at US$1.13 billion, is being implemented as a joint venture with the global logistical outfit DP World, a state-owned company in the United Arab Emirates. It will be the second container terminal in Senegal, after the Port of Dakar.

This new port is located at Ndayane, a small community that lies about 50km (31miles) south of the Senegalese capital – Dakar.

An agreement signed between the Senegalese government and DP World earlier in 2020 show that the latter will develop and operate the 300ha container terminal.

The Dubai-based Emirati logistics provider will work alongside the Port Authority of Dakar (PAD), through a subsidiary called DP World Dakar, which will finance, design and develop the land and marine infrastructure on a 600ha area.

Details of the agreement further show that at the initial stage of the project DP World will develop roughly 840m of quays and a 5km marine channel that will be able to manage ships up to 366m in length. This phase has been estimated to cost $837m.

The second phase, which will cost $290m, will see the addition of a 410m container quay along with further dredging works, which will allow the port to manage vessels measuring up to 400m.

Officials said that at the completion of the project, it is expected to increase Senegal’s capability to handle the largest container vessels in the world and increase its container handling capacity by 1.2 million TEUs per year.

The plan also entails that the port serves as a cruise terminal as well as a residential and commercial waterfront. DP World also said that it is planning to develop a special economic zone next to the Ndayane port.

Ndayane is a small fishing village located in the northern Thies Region of Senegal. The plan to erect a world class port there was first unveiled by President Macky Sall in 2017.

The new port is strategic in that it is located near the country’s new massive Blaise Diagne International Airport outside Dakar.

The Senegalese government says all these projects and more in the planning are part of efforts to support the realisation of President Sall’s ambitious economic development plan, dubbed ‘Plan Senegal Emergent (PSE)’.

This deep-water port project is said to be the largest single private investment in the country’s history.

President Sall said at the commissioning of the project on January 3rd, that it’s part of a transformational move by his government to boost the country’s economy and position it as a major trade hub and gateway in the ECOWAS region.

“We are ready for the structural transformation of our economy with this mega project,” he said at a colorful ceremony.

Senegal recently became the second country to join the World Logistics Passport, a major initiative championed by the UAE with the goal of increasing trading opportunities between developing markets, which is geared towards boosting the Arab nation’s position as a trade hub for Africa.

The World Logistics Passport was created to overcome trade impediments, such as logistics inefficiency, that currently limit the growth of trade between developing markets.

Sultan Ahmed bin Sulayem, DP World chairman, said at the launching ceremony that the project reflected the growing partnerships between Dubai and African markets, aimed at supporting development in the continent.

“As the leading enabler of global trade, we will bring all our expertise, technology and capability to this port project, the completion of which will support Senegal’s development over the next century,” Mr Sulayem said.

Founded in 2005, DP World, a multinational logistics company based in the city of Dubai, specialises in cargo logistics, port terminal operations, maritime services and free trade zones. It has operations in over 40 countries across Europe, US, Asia and Africa. In Africa it has operations in seven countries – South Africa, Somaliland, Senegal, Mozambique, Egypt, Djibouti and Algeria.

The Senegal project, which is its first in the ECOWAS region, is described by the company as its largest investment on the continent.

Last month DP World signed an agreement for its eighth African operations – a project in the Democratic Republic of the Congo (DRC) – for the development of a deep-sea port in the coastal town of Banana, along DRC’s 37km Atlantic Ocean coastline.

Sadio Mane in the newest New Balance ad: "I have been hunting my whole career, but...

Meet Jill Biden The Potential First Lady Of The United...