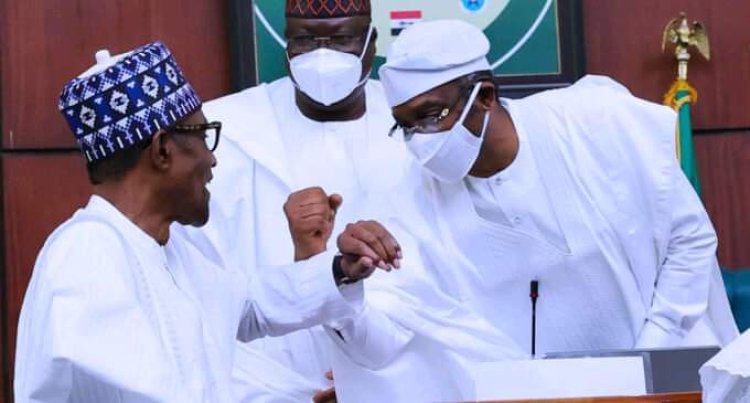 President Muhammadu Buhari on Thursday presented an appropriation bill of N16.39 trillion — the total expenditure of the federal government in 2022.

The bill christened ‘Budget of Economic Growth and Sustainability’ was laid before a joint session of the national assembly.

A breakdown of the budget shows that N768.28 billion was earmarked for statutory transfers, N6.83 trillion for non-debt recurrent costs, N792.39 billion for overhead cost and N5.35 trillion for capital expenditure.

Here are key highlights of the budget presentation:

a. Conservative oil price benchmark of 57 US Dollars per barrel;

Advertisement
c. Exchange rate of four 410.15 per US Dollar; and

The federal government estimated revenue at N17.70 trillion in 2022.

Total federally distributable revenue is estimated at N12.72 trillion in 2022 while total revenue available to fund the 2022 budget is estimated at N10.13 trillion. It includes grants and aid of N63.38 billion as well as revenues from 63 government-owned enterprises.

Oil revenue is projected at N3.16 trillion, non-oil taxes are estimated at N2.13 trillion, and independent revenues for the federal government are projected to be N1.82 trillion.

The president reaffirmed that defence and internal security continue to be the country’s top priority.

“We remain firmly committed to the security of life, property and investment nationwide. We will continue to ensure that our gallant men and women in the armed forces, police and paramilitary units are properly equipped, remunerated and well-motivated,” Buhari said.

“The 2022 budget is also the first in our history, where MDAs were advised on gender-responsive budgeting. These are part of critical steps in our efforts to distribute resources fairly and reach vulnerable groups of our society.”

A total expenditure of sixteen point three-nine (16.39) trillion Naira is proposed for the federal government in 2022. The proposed expenditure comprises:

f. Capital Expenditure of N5.35 trillion, including the capital component of statutory transfers;

The total fiscal operations of the federal government result in a deficit of N6.26 trillion.

The proposed borrowing represents 3.39 percent of estimated GDP, above the 3 percent threshold set by the Fiscal Responsibility Act, 2007.

Justifying the borrowing, Buhari said countries have to overshoot their fiscal thresholds for economies to survive and thrive.

“We need to exceed this threshold considering our collective desire to continue tackling the existential security challenges facing our country,” he said.

Zainab Ahmed, minister of finance, budget and national planning, had stated the COVID-19 pandemic as a reason for such action.

The fiscal responsibility law provides a limit of 3 percent debt threshold for debt sustainability. The Act allows the president to “exceed the ceiling if there is a clear and present threat to national security or sovereignty of Nigeria”.

The president said the federal government is targetting to increase the revenue-to-GDP ratio to 15 percent by 2025 from its current 8 percent.

“At that level of revenues, the Debt-Service-to-Revenue ratio will cease to be worrying. Put simply, we do not have a debt sustainability problem, but a revenue challenge which we are determined to tackle to ensure our debts remain sustainable,” Buhari explained.

“Very importantly, we have endeavoured to use the loans to finance critical development projects and programmes aimed at improving our economic environment and ensuring effective delivery of public services to our people.

a. the completion of major road and rail projects;

b. the effective implementation of Power sector projects;

c. the provision of potable water;

d. construction of irrigation infrastructure and dams across the country; and

Buhari said the government will improve revenue mobilisation in 2022 to achieve the following objectives:

a. Enhance tax and excise revenues through policy reforms and tax administration measures;

b. Review the policy effectiveness of tax waivers and concessions;

c. Boost customs revenue through the e-Customs and Single Window initiatives; and

d. Safeguard revenues from the oil and gas sector.

The government said it would strengthen the frameworks for concessions and public-private partnerships (PPPs). It stated that capital projects that are good candidates for PPP by their nature would be developed for private sector participation.

It tends to look at opportunities in green finance such as Sovereign Green Bond Programme and leveraging debt-for-climate swap mechanisms.