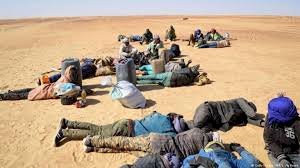 More than 80 migrants have been rescued from the Sahara desert after they were robbed and left to die by people they had paid to smuggle them to Libya, the U.N. migration agency said on Tuesday, citing survivors.

Drivers abandoned four trucks carrying the migrants from Nigeria, Togo, Mali, and Ghana with no food or water about 230 km north of the Sahara crossroad town of Niger’s Dirkou after spotting military vehicles.

Three days later, an IOM rescue team found the group, which included children, by chance on Sept. 3. Many were dehydrated, injured, and in need of immediate medical assistance.
Spokesman Paul Dillon told Reuters it was not unusual for smugglers, who tend to take payment upfront from people desperate to reach Europe, to abandon their passengers if they fear they will be intercepted.

Since 2016, IOM has helped rescue over 20,000 migrants from the Sahara desert – one of the most perilous parts of the journey for West Africans risking their lives to seek jobs in Europe.

The rescue teams have helped 321 people so far this year, excluding the latest group.
But sometimes they just find remains. The journey across the Sahara is the most perilous and fatal for African migrants who most at times dehydrates to the point of death or are kidnapped and taken as slaves or ransomed.

Bah Oury indicates to ECOWAS and the AU the way forward to be ’legitimate, credible...