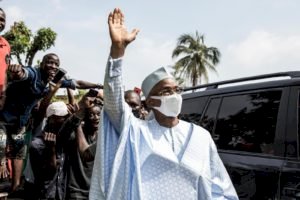 Members of the National Alliance for Democratic Alternation (ANAD), which backed Cellou Dalein Diallo's candidacy for the October 18 presidential election, faced the press on Tuesday.

The actors who make up this political alliance rejected outright the provisional results published by the Independent National Electoral Commission (CENI) on Saturday, October 24, giving Alpha Condé the winner of the poll with 59.49%.

They believe that "these results, fabricated from scratch in laboratories called Commissions Administratives de Centralization des Votes (CACV) do not reflect the citizens' vote massively and peacefully expressed in the ballot box on October 18, 2020".

They recognize Cellou Dalein Diallo as ’the legitimate winner of the presidential election of October 18, 2020 and call on the Guinean people to remain united in the defense by all legal means of this hard won victory at the polls’ ’.  Read ...

We, leaders of ANAD, National Alliance for Alternation and Democracy, congratulate the candidate Elhadj Mamadou Cellou Dalein Diallo for his brilliant victory on the day of the vote for the election of the President of the Republic and send our sincere thanks to the people  of Guinea for democratic maturity manifested on October 18, 2020 by leaving en masse and calmly expressed their desire for alternation.

We offer our deepest condolences to the bereaved families, wish speedy recovery to the sick and injured and pray for the rest of the souls of the valiant fighters for democracy.

We condemn in the strongest terms all forms of violence wherever it comes from, and call on the defense and security forces to exercise restraint and not accept responsibility for the barbarism of the infiltrated parallel forces.  ANAD rejects provisional results published by the Independent National Electoral Commission (CENI) on Saturday, October 24, 2020.

These results, fabricated from scratch in laboratories called Administrative Commissions for the Centralization of Votes (CACV) do not reflect the citizens' vote massively and peacefully expressed in the ballot box on October 18, 2020.ANAD qualifies these results as an electoral holdup.

Therefore, the National Alliance for Alternation and Democracy (ANAD), faithful to its previous statements based on authentic minutes and the results of the public counting of votes by polling station, recognizes El hadj Mamadou Cellou Dalein Diallo  as the legitimate winner of the presidential election of October 18, 2020 and asks the Guinean populations to remain united in the defense by all legal means of this victory hard won at the polls.  It demands the publication of the real results that have come out of the polls.

For the reestablishment of the truth of the ballot boxes and the guarantee of social peace, the alliance requests an international arbitration under the aegis of the United Nations and the African Union and this before the examination of these results by the constitutional court of Guinea.  .

We ask the outgoing President Alpha Condé to show political fair play by agreeing to recognize the people's choice expressed in favor of the ANAD candidate, Elhadj Mamadou Cellou Dalein Diallo, to give democracy the chance to take hold.  once through the alternation.

We call on the involvement of moral and religious authorities, as well as the international community, to demand the lifting of the siege of the home of President Elhadj Mamadou Dalein Diallo and the UFDG HQ.