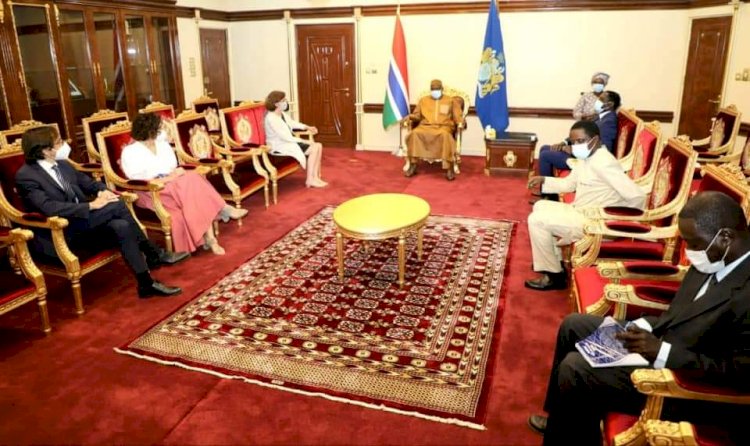 President Adama Barrow has called for stronger cooperation in the manufacturing and Tourism industry as he received Ambassadors of the Kingdom of Spain and Belgium accredited to The Gambia on Wednesday morning. The Head of State pointed out that such investments will create job opportunities for the youth, as well as curb illegal migration.

After receiving the Letters of Credence of The Spanish Ambassador, H.E Olga Cabarga Gomez, President Barrow recognised the support provided to the Gambians living in Spain in particular, through skills transfer, while promoting bilateral cooperation in the areas of tourism and the manufacturing industry. He said such investments would create youth employment opportunities and help curb migration.

The Spanish Ambassador extended best wishes to the President from the King of Spain noting that she felt honoured to be accredited to The Gambia. “We support the reforms and democratization taking place in The Gambia because it is good for the people,’’ she said.

Additionally, she stated that she would further strengthen the bilateral ties between the two countries by encouraging more Spanish Investors and bring more tourists to The Gambia, adding that, “We have a big community of Gambians in Spain that are working hard for both the success of Spain and The Gambia. This means our relationship is stronger and we looking for ways to make it even stronger,’’ she noted.

With a population of forty-five (45,000) thousand, Spain has the largest concentration of Gambians, while the Gambia is home to one thousand (1000) Spaniards.

For the Belgian Ambassador, H.E. Hubert Roisin, the relationship between The Gambia and the Kingdom of Belgium is manifested daily by the frequency of Brussels Airlines entering and leaving the Gambia. He praised the trade links between The Gambia and the cities in Belgium, stating that it extends across sectors. He also highlighted the EU-funded cooperation that is currently creating decent jobs for young people in The Gambia through agriculture while commending the cooperation between the Belgium Port of Ghent and The Gambia Ports Authority.

On the relationship with Belgium, President Barrow observed the special interest Belgium has in The Gambia and said there is potential to enhance trade and tourism for the mutual interest of both countries. On the promotion of tourism, Brussels Airline already contributes to air travel with at least five flights per week.

The Belgian Development Agency is also supporting The Gambia with its transitional programme and other areas of mutual interest through the European Union.

Insecurity: Negotiating With Bandits Is Not The Best – Abdulsalami Abubakar