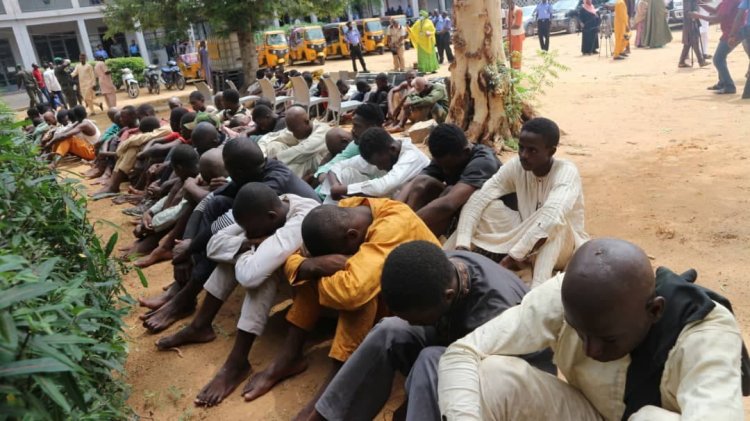 This was stated by the State Commissioner of Police, CP Sama’ila Shuaibu Dikko, while addressing pressmen at the State Police Headquarters, Bompai.

The CP said the purpose of the press conference is to update the general public on the recent breakthroughs and achievements recorded by the Command in its fight against crimes and criminality as the 3rd Quarter of the year 2022 sets in.

He said, “In our effort to effectively Police Kano State, we intensify Community Policing engagements, constant raids of criminal hideouts and black spots, Intelligence-led and Visibility Policing, rapid response to distress calls, full adherence to the ethics of the Force and synergy with sister security agencies and community policing stakeholders.”

The CP stated that among those arrested are 42 armed robbery suspects, nine kidnappers, 16 suspected fraudsters, and two human trafficking suspects.

According to him, among the items recovered are, 25 rifles including three (3) AK-47s, one micro Uzi, one pistol, one pump action, ten locally made pistols, nine Dane guns and 12 motor vehicles.

Dikko further disclosed that other items recovered are, seven tricycles and three motorcycles; 122 knives and 96 other rod-made sharp weapons.

The Commissioner of Police said, “I must appreciate the Kano State Government, the good people of the state, other security agencies, the media, and members of the Police Community Relations Committee (PCRC).

He added that the Command will continue to sustain the tempo in fighting all criminal activities in the State.