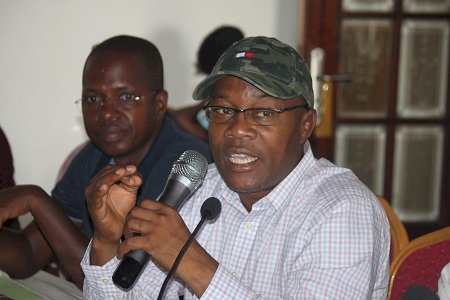 The communications officer of the Union of Democratic Forces of Guinea (UFDG) never misses opportunities to shoot cannonballs at those in power.  Placed in pre-trial detention at the Central House in Conakry, Ousmane Gaoual Diallo continues to claim the victory of Cellou Dalein Diallo in the presidential election of October 18.

Indicted for facts of manufacturing, acquisition, storage, possession, use of light weapons, war, possession of ammunition, threats and criminal associations, the former first-past-the-post deputy of Gaoual refuses to do so.  In mesh with justice, he criticizes the Conakry regime all the time.

"Subservient judges, a corporalized administration, an instrumentalised army, such is the image offered by Guinea under the regime of Pinet and its" pro forger "climber.  Lacking legitimacy, they vowed to drag the UFDG and its allies into their inevitable downfall, "said Ousmane Gaoual Diallo.

"For whoever remembers the story of 'Granada' to which the real mercenaries have stuck all the phobias in the world to silence him, it is therefore easy to understand the reason for our stay in prison as well.  Possession of weapons of war?  Why do you face a crumbling house of cards?  How ridiculous! ’’, He exclaims.

‘’ Alpha, free the palace and go, retire so you have time to repent, even if I don't know by what prayer or religion.  In any case, not by the gym which itself is no longer suited to your physique, '' he says on his Facebook page.

He ensures that the fight for democratic alternation continues.  ’Give the UFDG back their victory, period.  Cellou Dalein Diallo is the elected President of Guinea.  This is not a debate.  Good to know, hi.  The prison galvanizes us, '' reassures Ousmane Gaoual Diallo.

Adebayor destroys Adja Diallo:I do not last in public toilets"