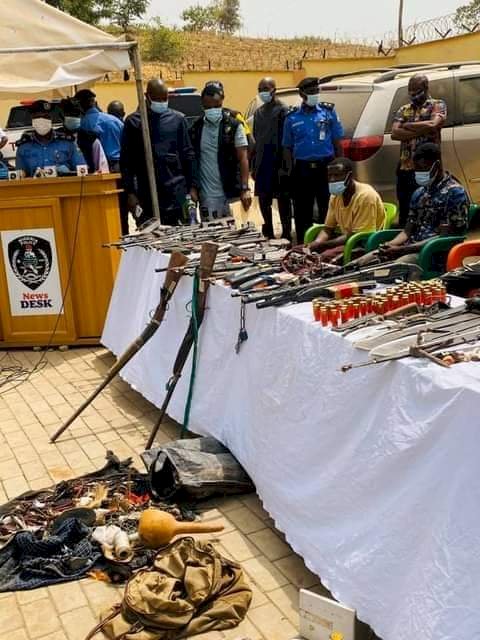 Following the flag-off of ‘Operation Puff Adder II’ by the Inspector General of Police, IGP M.A Adamu, NPM, mni on 15th February, 2021, to reinvigorate the ongoing fight against violent crimes in the country and bring the perpetrators to book, operatives of the FIB Intelligence Response Team IRT and Special Tactical Squad STS of the Force attached to the Operation Puff Adder II have arrested forty-eight (48) criminal suspects, including forty-seven (47) male and one (1) female, for their involvement and indictment in cases of armed robbery, kidnapping, unlawful possession of firearms, cybercrime/financial fraud and other heinous crimes in some parts of the country. Forty-one (41) prohibited firearms including fourteen (14) AK47 rifles, ten (10) AK47 Magazines, fifty-eight (58) live cartridges, four (4) AK47 live ammunition, four (4) POS Machines, two (2) laptop computers, eighteen (18) mobile phones, Internet MODEM and nine (9) ATM cards were recovered from the suspects in the operations.

Investigations by the Police team revealed that the suspects are members of a notorious armed robbery/kidnapping syndicate that specializes in terrorizing innocent citizens in the North-Central/North East States particularly in Plateau and Taraba States. Police investigations have uncovered the roles played by each member of the gang during the kidnap of the Honourable Member. Investigations also established how the proceeds of the crime (ransom) were shared among the suspects.

The Police operatives also arrested a 12-man cybercrime syndicate for internet fraud and other cyber-related offences. The suspects, with their ages within the range of twenty-two (22) and thirty (30), were arrested at a residence in Kubwa area of the Federal capital Territory (FCT), Abuja following intelligence received by the Police.

Similarly, the Police team busted a 2-man gang of a 61-year-old physically challenged man, Musa Usman from Kebbi State who resides in Anambra State and one Ahmed Shuaibu, 27years, native of Nasarawa State for complicity in the distribution and sale of illicit/dangerous drugs to bandits in their camps at Babuga, Nasarawa State. The physically challenged man has been taking advantage of his physical state to evade police attention until his eventual arrest. Thirty-five wraps of substance suspected to be Cocaine, were recovered from the suspects.

The Inspector General of Police, while noting that the Operation Puff Adder II is already yielding positive results barely ten (10) days after it was flagged-off, has assured that the Force will not relent in its commitment at re-dominating and reclaiming the public space from criminals that are hell bent on threatening the internal security order of the country and bringing such suspects to justice.