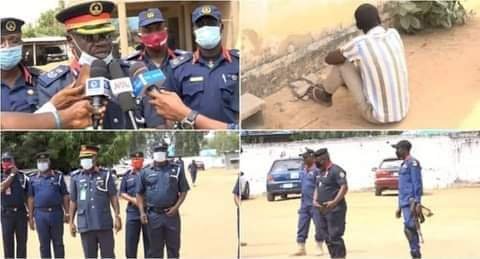 A High profile suspected kidnap kingpin Ubale Mohammed who has been on the watchlist of security agencies in Taraba state for years now has finally been arrested.

The arrest was made possible by the Nigeria Security and Civil Defence Corps (NSCDC) through intensive intelligence gathering, surveillance, and smart operation of officers of the state command.

He was arrested in Garau community of Karim lamido local government area of Taraba state.

Parading the suspect before journalists in Jalingo, the state commandant of the NSCDC, Muhammed Waksha disclosed that the suspect while sighting operatives of the NSCDC, broke his sim card and threw away his mobile phone into a river to avoid been investigated to unveil his crimes and those linked to him.

According to the commandant, none of the fleeing gang members will escape its dragnet as it has been spread across the state and the nation to get them wherever they hide.

The suspect is also said to have kidnapped several persons from their homes and whisking them away to a community bordering Plateau state and Taraba with heavy ransom collected.

Before now, the NSCDC command had arrested and handed over another suspected kidnap kingpin Barde Bulala from the same Karim Lamido LGA of Taraba, whose confession led to the arrest of Ubale Mohammed another kidnap kingpin.

Bulala who is still in the custody of the IRT led by Abba Kyari is aiding by divulging more confessional statements that has been of great assistance to security operatives.

” Yes, we do collaborate with not only Abba Kyari, but with also other agencies, and right now the one that is singing the music across the Federation was arrested by my command, we handed him over to Abba kyari and is yielding result ”

” It is based on intensive intelligence gathering, surveillance and cooperation by members of the public, because when the public has confidence in your activities, they give you reliable information and we do not just act on that, we have to also use our intelligence to monitor before we swing into action ”

He adds that the tides of kidnapping is decreasing due to their unwavering stand to stamp out kidnappers and their sponsors.

Waksha notes that residents of the state needs to be vigilant and report any strange movement or face(s) to security operatives for action.

The suspect has three wives, 14 children, and a member of the Vigilante Group of Nigeria.

He says he has no one to vogue for him or that can be called his best friend in the whole of his community.

The suspect has since been handed over to the Intelligence Response Team of the Nigeria Police Force, for further interrogation

Highway Development Management Initiative (HDMI): All You Need To Know

Previous National Economic Plans Below Expectation Due To Lack Of Cooperation -...

We'll cooperate with military to wipe out bandits - Miyetti...