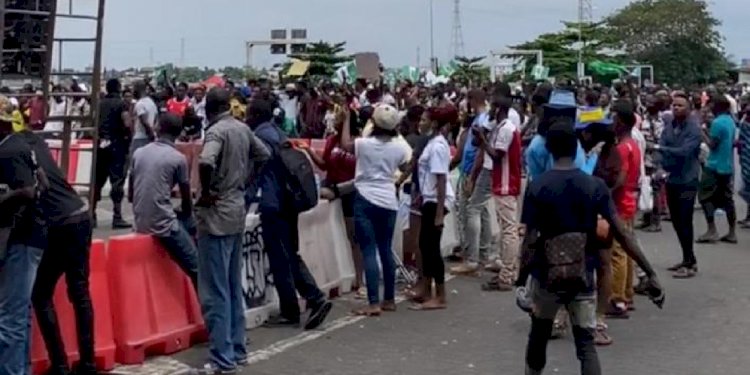 Adeshina Ogunlana, the lawyer representing the #EndSARS protesters at the Lagos Judicial Panel of inquiry, has said there are irregularities in the footage submitted by the Lekki Concession Company (LCC) to the panel.

Mr Ogunlana said this during the cross-examination of the Managing Director of LCC, Abayomi Omowuwasa, on Friday.

“On that October 20, there was a human being behind, directing the camera, because of the irregularities has shown by the footage,” Mr Ogunlana said.

“The camera is designed to work automatically, panning, tilting, and zooming are already programmed,” he said.

Mr Ogunlana said between 12:00 and 13:00 hours of the footage, there is evidence of irregularities of the filming at the time the shooting occurred.

“There were fluctuations, substantial fluctuations in the time of the panning, of the tilting, and of the zooming.

“You will see that from 12:00 hours to 1 pm; that is 13:00 hours, the camera was tilting and panning and rotating at an average of 15 to 19 seconds to capture the entire area. I will demonstrate that to you,” Mr Ogunlana said.

He applied that the part of the footage be played so he could show evidence.

Meanwhile, Rotimi Seriki, the counsel representing the LCC, objected to his application stating that the panel should restrict Mr Ogunlana to the hours viewed, between 5 pm and 7:59 pm.

“Mr Ogunlana has conceded that the relevant part of the footage is from 5 pm to 8 pm, which the entire panel watched, which he also has an advance copy. Asking questions about what happened at 12 midnight and 1 pm, I do not know the relevance of that to that issue,” he said.


Mr Seriki said if the legal counsel to the #EndSARS protesters has an issue with the relevant part of the footage, he should go straight to it and indicate the time when he feels someone has gone wrong.

Another lawyer at the hearing, Olumide Fusika, a Senior Advocate of Nigeria, urged the panel to be interested in what Mr Ogunlana wants to establish.

“What Mr Ogunlana is trying to say is that there was a manual intervention. If it is preset, the sequence of changes will be relevant. If there is an irregularity, at least, we should get the evidence.”

He urged the panel to look into the evidence Mr Ogunlana seeks to tender as it will help the panel in its fact-finding mission.

Abiodun Owonikoko, the counsel representing the state government in the matter, also objected to the request by Mr Ogunlana to show the discrepancies observed in different parts of the footage.

“This panel is a panel guided by terms of reference and once the party stipulates a particular evidence as irrelevant one in respect of the matter, by consent we are bound by that understanding.

“There was a reason we opted not to deal with footage from 12 midnight till 4:59 pm because we considered it irrelevant to the business of the panel.

“It is impossible to ask questions on the initial 16 hours under pre-examination unless we view the entire footage,” he said.

Mr Owonikoko urged the panel to restrict Mr Ogunlana to hours of the footage that have been viewed by the panel.

Mr Ogunlana thereafter applied for the panel to watch the entire footage for him to be able to show evidence.

All attempts to get the projector working on Friday were abortive, with Mrs Okuwobi noting that the matter will be adjourned.

Mr Seriki, the counsel to the LCC, applied that his client be given two weeks as he is scheduled to travel outside the country for an appointment.

The matter was adjourned till December 11.