ISIS claims eight people, including six French, were killed in Niger on August 9 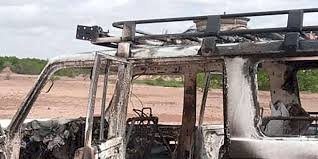 The aid workers’ vehicle, after its attack, near Kouré, about sixty kilometers from Niamey, on August 9. – / AFP

The Islamic State (IS) group claimed responsibility on Thursday (September 17th) for the August 9 assassination in Niger of eight people, including six French aid workers and two Nigerians, in its Al-Naba propaganda unit.

Article reserved for our subscribers Read also Niger: what we know about the assassination of the humanitarian group in the Kouré reserve

The publication, authenticated by multiple sources, including the American organ SITE, specializing in the monitoring of jihadist groups, evokes a “lightning attack” in the Kouré region which resulted in the death of six French “Crusaders” and two “apostates. »Nigeriens.

Article reserved for our subscribersRead also The assassination of humanitarians in Niger, revealing of the jihadist threat

Young French aid workers, two men and four women, were murdered with their Nigerien driver and guide by armed men on motorcycles on August 9 while they were visiting the Kouré giraffe reserve, 60 km south-east of the capital Niamey where they were based.

Read also Niger: who were the six French people killed south-east of Niamey?

After the attack, the Nigerien government closed the reserve while France placed the site in a “red zone”, just like the rest of the country except the capital. Niger, a very poor Sahelian country, is plagued by recurrent jihadist attacks which have left hundreds of people dead.

With Mali and neighboring Burkina Faso, it is at the heart of a huge area scoured by jihadist groups claiming to be ISIS or its rival Al-Qaeda in the Islamic Maghreb (AQIM), and where some 5,100 are deployed French soldiers of the Barkhane counterterrorism force.

Read also “The madmen of Allah tore them from us”: Niger in shock after the death of aid workers

US President Biden invites Buhari, 39 other leaders to...