Gov’t now set to vote on amendment that, if passed, would expel the Israeli ambassador to Ireland and impose sanctions against Israel. 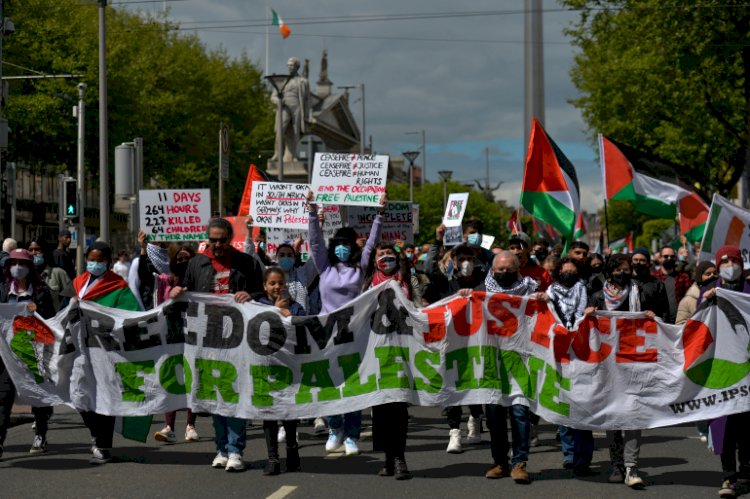 Pro-Palestinian protesters seen on O'Connell Street, Dublin, during a Rally for Palestine on Saturday, May 22, 2021, in Dublin, Ireland [Artur Widak/ Getty Images

The Irish government has supported a parliamentary motion condemning the “de facto annexation” of Palestinian land by Israeli authorities, in what it said was the first use of the phrase by a European Union country in relation to Israel.

Irish Foreign Minister Simon Coveney said on Tuesday that the motion, brought forward by opposition party Sinn Fein, “is a clear signal of the depth of feeling across Ireland”.

“The scale, pace and strategic nature of Israel’s actions on settlement expansion and the intent behind it have brought us to a point where we need to be honest about what is actually happening on the ground. … It is de facto annexation,” Coveney, of the centre-right Fine Gael party, told parliament.

“This is not something that I, or in my view this house, says lightly. We are the first EU state to do so. But it reflects the huge concern we have about the intent of the actions and of course, their impact,” he said.

If passed, the amendment would require the government to expel the Israeli ambassador to Ireland and to impose economic, political and cultural sanctions against Israel.

Most countries view settlements Israel has built in territory captured in the 1967 war as illegal and as an obstacle to peace with the Palestinians.

Coveney, who has represented Ireland on the United Nations Security Council in debates on Israel in recent weeks, had insisted on adding a condemnation of recent rocket attacks on Israel by the Palestinian group Hamas before he agreed to government support for the motion.

Some of the Irish parliamentarians wore face masks bearing the Palestine flag or of the checkered keffiyeh pattern.

The motion came days after a ceasefire ended 11 days of the worst fighting between Israel and Palestinian armed groups in years.

At least 253 Palestinians were killed, including 66 children, according to Gaza’s health ministry, while about 2,000 were injured. At least 12 people were killed in Israel.

The Irish parliament, or Dáil, is set to debate the People Before Profit amendment of the Sinn Fein Private Members motion on Wednesday, with a vote expected later.

“Ireland has become the first EU state to recognise Israel’s de facto annexation of Palestine in contravention of international law,” tweeted Ronan Burtenshaw, editor of the UK’s socialist Tribune Magazine. “A landmark on the road to isolating an apartheid state as we did in the 1980s. Next stop: Boycott, Divestment and Sanctions.”

John Brady, a Sinn Fein politician, tweeted: “We have forced a massive shift on the position of the Irish Government. They have stated that Israel has de-facto annexed Palestinian lands. Ireland is 1st EU country to state Israel’s actions break international law. There must be consequences for these actions #FreePalestine.”

More than 5,200 people have signed Barrett’s petition, which calls on the Irish government “to publicly declare that the state of Israel is guilty of war crimes”.