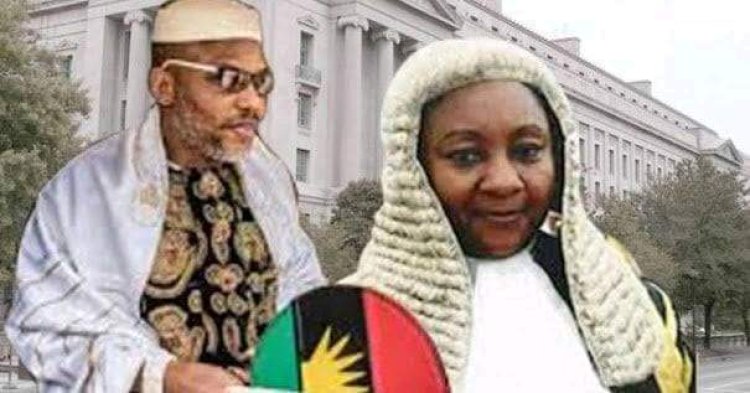 Justice Binta Nyako of the federal high court in Abuja on Thursday issued a stern warning to Mr Ifeanyi Ejiofor, lawyer to the detained leader of the proscribed Indigenous People of Biafra, IPOB, Nnamdi Kanu to stop writing letters directly to her in respect of the trial of his client.

The Judge complained that the lawyer had written two lengthy letters to her directly as against the procedure of channelling such letters through the Registrar of the court.

Justice Nyako while making her position known in the open court, said she will not take kindly to a repeat of breach of procedure to reach court on such issue.

Although the lawyer did not react to the Judge’s warning, he sought to move two motions on notice on behalf of his client.

Kanu’s lawyer had approached the court with a motion on notice seeking abridgement of time to bring back the trial of the Biafran leader from January 19 next year to an early date either in November or December.

The Biafran leader was, however, not in court to witness proceedings as he was not brought by the Department of the State Service DSS where he has been on remand since his re-arrest by the federal government after jumping bail earlier granted him.

The federal government through its counsel Mr Shuaib Labaran informed the Judge that his client has filed a counter-affidavit to vehemently oppose the request to abridge time in the trial that had been fixed for January next year.

Justice Nyako who was taken aback by the motive of the motion told Kanu’s lawyer that there was no judicial time for her court to bend backwards the trial date.

In the drama that ensued, the case diary of the court was read to the lawyer to establish that the court has crowded cases to attend to.

Citizens’ Alliance supporters meet President Barrow, say they will vote for him