Militants of the outlawed Indigenous People of Biafra (IPOB) on Sunday killed a woman, her four children and six others, all of them of... 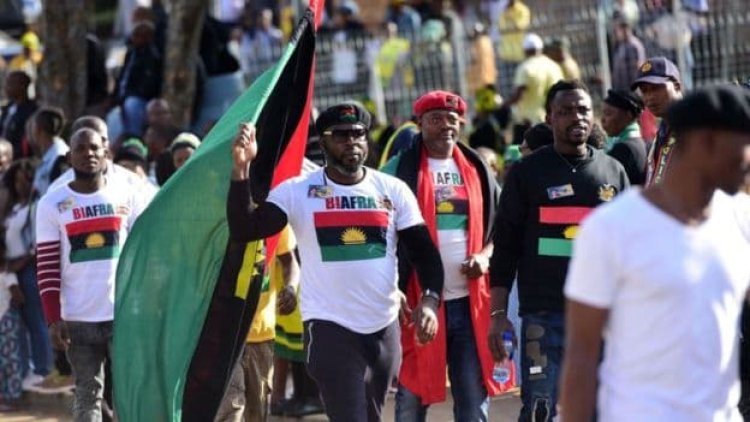 The pregnant woman and her children were killed at Isulo, Orumba North Local Government Area of the state.

The killings marked a new low in the heightened attacks on non-indigenes by IPOB terrorists who are also attacking the symbol of authority including the police and the military.

Natives of Anambra State and the South East, in general, have not also been spared by the IPOB terrorists who have been wreaking havoc for a long time amid agitation for secession.

However, 48 hours after the Sunday’s killing of the northerners without any provocation, the story has not been told by any of the national print and broadcast media despite wide coverage by the social media with graphic photos of the mayhem and condemnation by security operatives, groups and individuals over what they called “conspiracy of silence.”

The killing of the northerners was perpetrated by the outlawed group a few days after the discovery of the head of an Anambra State lawmaker who was abducted by the terrorists.

The Sarkin Hausawa of Orunba North LGA, Alhaji Sa’id Muhammad, yesterday decried that northerners in Anambra State have made up their minds to leave the state because of the constant killing of their relatives by members of the Eastern Security Network (ESN), the armed wing of the outlawed IPOB.

In an interview with Daily Trust, Muhammad said the killing of the pregnant woman together with her four children by gunmen was not new to them as many of his people were killed in such a callous manner.

“The woman was from Adamawa State. Before her death, she lived in Orumba South, and on Sunday, she visited her friends with her four children.

“It was on her way back home in Orumba South that she was killed. She was being conveyed by a commercial motorcyclist when they were ambushed by the gunmen. They murdered her and her four children but the motorcyclist escaped,” he said.

In a gory video trending on Twitter and seen by Daily Trust, the victims were seen lying in the pool of their blood with bullets spread around and a narrator speaking in Igbo saying, “Everybody should look at this video that they have shot a woman and her four children. They are from the North. And they are shooting everybody they see on the street; so people should be careful.”

Our correspondents report that on that very Sunday, five commercial motorcycle riders were also killed and their bikes burnt at Onocha LGA. The bodies of four of the deceased were deposited in the morgue while the fifth one was burnt to ashes.

Mohammed said another man, Abdullahi, who was selling roasted meat by the roadside at Nnanka, was also killed at his suya spot.

“His body was by the roadside since Sunday evening until in the afternoon on Monday when I called the police DPO and informed him about it and requested him to help us recover the remains.

“He told me that he cannot send his men there because of the sit-at-home order. We are now planning to leave for North as we can no longer stay here…They are killing us on daily basis,” he said.

He said his younger brother, Aliyu, was also killed two months ago in a similar manner.

Daily Trust reports that some trucks conveying goods to the South were also set ablaze in Anambra at the weekend and the drivers and other occupants were killed, injured or disappeared without a trace. Some truck drivers of northern extraction said that they are now operating with fear in the South East region.

Adamu Shu’aibu, who works with a private company in the region said that the rate at which the militants were attacking and killing drivers was alarming.

“I lost many of my colleagues to the nefarious activities of the terrorists and the killings are not being reported. Many of our colleagues have abandoned the driving job. The gunmen mostly attack drivers on some routes that have few or no security personnel.”

When contacted, the Police Public Relations Officer in the state, Ikenga Tochukwu, could not confirm the incidents, saying the details were sketchy.

He said the command would talk about the incidents when they receive a clear picture of what transpired.

However, a senior police officer who did not want to be named confirmed the Isulo attack.

The Commissioner of Police in Anambra State, Echeng E. Echeng, Monday, accused communities in the state of shielding criminals in their midst. He stated this while briefing journalists on the murder of the Anambra State lawmaker, Okechukwu Okoye, and his aide, Cyril Chiegboka.

Daily Trust reports that the IPOB militants have vowed to kill more lawmakers in Anambra State.

The group issued the threat in a note allegedly found where the head of the lawmaker was dumped.

The commissioner said, “Some of us have come out to tag these people ‘unknown gunmen’ while in actual sense they are known. We are trying to mystify something that is not just there.

“It is high time we went into demystifying the tag ‘unknown gunmen’. They are not spirits; they are our brothers and they live with us in our communities. That is the obvious truth. We know who these people are.

“The problem the state security has is a total conspiracy of silence when nobody sees something, nobody says something and nobody hears something.

“We are glorifying people that we know and tag them as unknown gunmen,” he said.

The police commissioner also debunked insinuations that Fulani were behind the attacks and killings in the state.

He said available information and records of arrests made in the state showed otherwise, accusing the communities of shielding the criminals in their midst.

Meanwhile, tension has heightened in Anambra State following the incessant killings of people by IPOB militants.

The Coalition of Northern Groups (CNG) said yesterday that it had taken stock of events unfolding in Nigeria, noting especially, the unrelenting disturbances created by certain interest groups in the South East, in the form of violent attacks on people of other sections, particularly the North.

Spokesman of the group, Abdul-Azeez Suleiman, said in a statement that unprovoked evictions, attacks, killings, destructions of properties and other forms of violations against northerners in various parts of the South East had resulted from the hate campaigns and propaganda being conducted by regional and ethnic agitators.

“We are particularly disturbed by the reports of the brutal murder of a mother and her four children for the only sin of being northerners.

“These killings followed other coordinated attacks on northern traders and haulage trucks, killing some people and destroying millions worth of properties including the truck.

“We have watched and studied these events carefully and with considerable restraint and maturity, to the point of condoning and accommodating several unreasonable and unacceptable actions that have been perpetrated against Nigerians collectively, and northerners in particular.

“Everyone can see that the diabolical scheme planned and exhibited in the actions and clamours of IPOB/ESN terror groups are supported morally and politically by the vast majority of the pliant Igbo elites, politicians, traditional rulers, business persons, and the larger population of this ethnic group.

“It is also a situation that feeds on the docility of the affrighted section of those who pose as northern leaders today.

“The recent attacks have pushed matters to a point whereby silence has become complicit and inaction is no longer an option, making it impossible for us to remain indifferent or silent in the face of such extreme provocations.

“As the representatives of various interest groups from northern Nigeria, the CNG today declares enough is enough. The North will no longer remain passive under such deliberate and sustained attacks on its people and interests and will henceforth be forced to react to every provocation and unwarranted violation,” he said.

The group also cautioned media operators to be more restrained and balanced in their reporting of all situations in the country particularly when matters coming from or affecting northerners were reported or commented on.

“We caution them to desist from and to eschew the slanted reporting of events with greater bias against a particular religious and ethnic group as is witnessed in the reporting of security situations recently.

“We warn that editorial policies and restraints imposed by ordinary decency and sanity must not be abandoned by the media establishment for sensational and often biased reporting that only inflame tensions in the country,” the northern group said.

Meanwhile, many social media influencers in the North took to Twitter condemning the killings of the northerners by IPOB in the South East.

Senator Shehu Sani twitted: “You condemn ‘the murder’ in Sokoto but you don’t have the courage and the conscience to condemn the murderous activities of gunmen and unknown gunmen in your area (shokoto), including the slaughter of a legislator; that is hypocrisy and cowardice.”

Gimba Kakanda also tweeted: “Last week, you were in support of mob justice because it is perpetrated by your kinsmen. Today, you are hurt and against it because your kinsmen are the victims. And you are calling out Arewa to seek justice for Deborah, your silence on IPOB’s killings of “Hausa Muslims” is telling.

“Ahmed Musa Husaini speaks for me here in calling out the double standards of both sides of the Niger. The killings in Anambra, including the targeting of “Hausa Muslims,” are a tragedy that must be condemned by all. It also comes with a lesson to those who justify jungle justice.”

Jaybee @KhaleelJibreel said, “We should create our own media houses to publicise any atrocity meted to us. Stop crying foul, you are not expecting your staunch enemy to battle your insult or killing. If we don’t do the needful, this is how we will keep on staying on the defensive. North is not ready.”

A security expert, Kabiru Adamu said to end the excesses in the South East, the legal status of IPOB and its armed wing, the ESN, is that of a terrorist group and therefore the people killing in that part of the country should be treated as such.

“I am therefore of the view that the government should apply the provisions of the National Counter-Terrorism Strategy (NACTEST) and the Terrorism Prevention Act 2022 fully on it.

“This should include using all the elements of Nigeria’s national powers to identify its membership, sponsorship, funding, and weapons supply channels and blocking them as well as arresting and prosecuting them. Only this full application of the law can contain the atrocities of the IPOB.

“To do this effectively, the government needs to enhance its intelligence gathering capabilities both human and technological to allow it to understand who are involved, what their interests are and why the involvement.

“Intelligence gathering will help clarify whether there are truly other gunmen groups behind the atrocities in South East or it is IPOB operating under the anonymity of “unknown gunmen”.

“Additionally, intelligence will allow government open back door channels of addressing the challenge but from a position of strength,” he said.