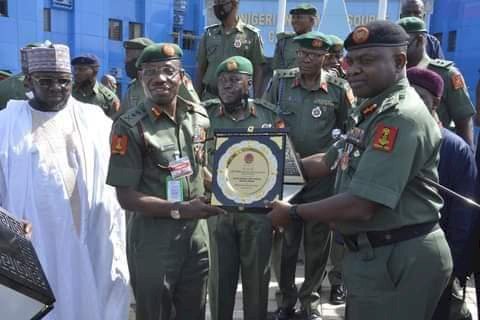 The Chief of Army Staff, Lieutenant General Tukur Buratai said the war on terror can be won not just by applying kinetic force but through fighting the ideological beliefs of terrorist.
General Buratai disclosed this on Thursday at the opening of the Second Nigerian Army Spiritual Warfare Seminar at the Nigerian Army Resource Centre in Abuja.

Represented by the Chief of Army Policy and Plans, Lieutenant General Lamidi Adeosun, General Buratai noted that the Nigerian Army has been successful in the fight against terrorist using all forms of kinetic operations but with challenges in the ideological beliefs of the terrorists.
“The ongoing military operations against Boko Haram and Islamic State in the West African Province ISWAP terrorists as well as other criminal groups is driven by the desire to keep Nigeria safe for each and every one.

“Ideology is a system or concept of views which serves to make sense of the world while obscuring the social interests that are expressed therein, this has remained the driving force for the terrorist groups
“In the case of Boko Haram, it’s ideology classifies western education as a sin which hinders its pursuit of attainment of several claim puritan Islam. ISWAP on the other hand challenges the legitimacy of democratically elected government
“By its nature, ideology has power to manipulate what people think how they form their opinion and of course it affects their attitudes and actions” he added.
In his key note address, one-time Deputy Governor of the Central Bank of Nigeria Obadiah Mailafiya noted that some global powerful interests are responsible for the resurgence of violent attacks against the Nigerian troops with the view to driving Nigeria into chaos.

“I don’t believe that what is happening in the Northeast is just a local phenomenon. There are global powers involved using satellite technologies to direct the insurgents so that our men are sabotaged when they are going on secret operations they are ambushed. It has happened countless times.

“I believe some people want to use it to destroy our country. They want Nigeria to become as comatose as the Democratic Republic of Congo which is a huge elephant lying on its back.

“Some people want to turn our country into a comatose economy because they are afraid of the potentials of Nigeria.” He said.

Dr Mailafiya called on Nigerians to support the Nigerian military in its quest to rid the nation of terrorism and other violent crimes by providing credible intelligence while stemming the tides with positive narratives.

The programme is expected to sensitize and mobilize religious/spiritual leaders to enlighten and educate their followers on the true and correct tenets of Islamic and Christian religions so as not to be easily brainwashed by the devilish and wicked teachings of Boko Haram and ISWAP’s ideology.

The seminar is also intended to stimulate renewed vigour to finding ways of curtailing and tackling Boko Haram's extremism and recruitment drive using counter narratives, knowing fully well that terrorism is about battle of inner consciousness/the struggle for winning the hearts and minds of the people.

I did not accuse Governor El-Rufai of divulging information...