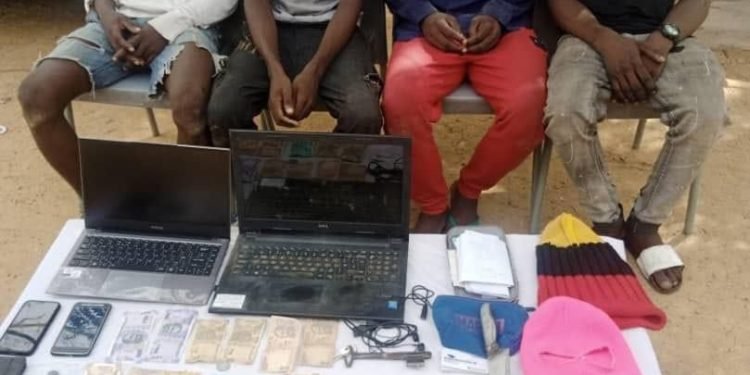 Parading the suspects, Police Public Relations Officer, Abdullahi Kiyawa, said the suspects were arrested during an intelligence-led surveillance in Sharada Quarters.
“A team of Operation Puff Adder, led by SP Abdulrahim Adamu, Divisional Police Officer (DPO), Sharada Division, Kano, while on intelligence-led surveillance patrol at Sharada Quarters, Kano Municipal LGA, intercepted a tricycle conveying one passenger parked in front of the residence of an Indian national suspiciously.
“On sighting the presence of the police, the T
tricycle rider Alhaji Musa, 45, of Tudun Rubudi Quarters Kano attempted to escape, but the team shot at the tyre of the tricycle. The rider and one Onyekachi Jude, 19, of Rinji Quarters, Kano, were subsequently arrested.”
Kiyawa added that other members of the gang already operating in the residence were arrested.
“The gunshot attracted the armed robbers inside the Indian national’s residence, and in trying to escape, the following suspects: Moses Jude, 23, of Rinji Quarters Kano; Sunday Titus, 20, of Zoo Road Quarters Kano; Kyunle Bhago, 22, of Sabuwar Gandu Quarters, Kano, were arrested.
“Items recovered from them include: one mobile handset, one sharp knife, mask, one Infinix computer laptop, one Dell computer laptop, one iPhone 11 Pro, one Modem, 530 rupees, one bag and other documents,” the police spokesman noted.
According to him, the suspects will be arraigned upon the conclusion of investigation.