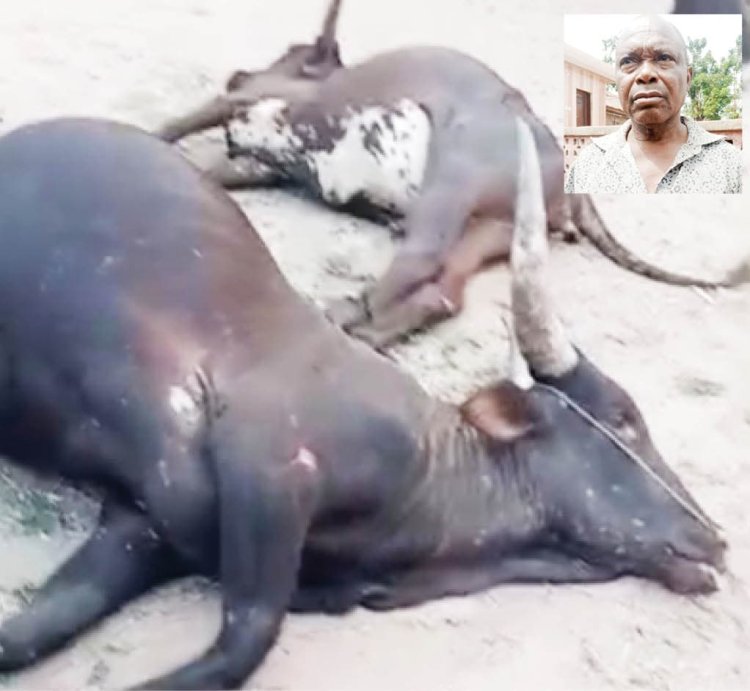 The recent killing of a herder by suspected members of the banned Indigenous People of Biafra (IPOB) in Enugu State has left his family, his Igbo employer and those who knew him in grief.

The herder, Mohammadu Alarabe alias Ogbodo, had been taking care of the cattle of a prominent Igbo family for over 20 years before he was gunned down on that fateful Wednesday, January 19, 2022.

The assailants also killed some of the cows of Alarabe’s master, Chief Peter Chukwuani Onyeabor, a famous cattle dealer in Enugu State, who inherited the business from his late father.

Onyeabor is said to be a prominent cow merchant at Ugbowka, Nkanu-East Local Government Area of the state.

The Onyeabor family is reputed to be the most famous in the cattle business in the area for over 200 years.

Even though Onyeador described the assailants as “gunmen”, the action has the hallmarks of members of the Eastern Security Network (ESN), the armed wing of the outlawed IPOB which had severally attacked herdsmen in the southeastern part of the country.

Some natives in the area also said it might not be unconnected with the IPOB’s warning that the sale and consumption of cow meat would no longer be allowed in the South East.

The release conveying the warning was attributed to IPOB spokesman Emma Powerful.

Meanwhile, the police are yet to make any arrest concerning the attack. Spokesman of the state command, ASP Daniel Ndukwe, said he was yet to get the details of the matter and may issue a statement.

Sadly, some people celebrated the killing of Alarabe on social media.

A video clip circulated in social media last week showed the Alarabe’s remains covered in blood and a gory sight of many cows shot dead while others were in severe pains due to various degrees of bullet wounds.

Although some voices in the video were heard bemoaning the callous attack, no one mentioned the location of the sad incident.

However, to ascertain the reality of the matter, Daily Trust went to Akwuke Autonomous Community in Enugu South Local Government where rumour said the incident took place.

Later, the search continued and ended in faraway Ugbowka in Nkanu East Council Area of Enugu State where Onyeabor, 62, narrated how the sad incident occurred.

“The attack happened at about 5:25pm.

“I was sitting here in the veranda, discussing with some of my customers who came to buy cows on that fateful day. I sell my cows here. I don’t take them (cows) to the market. People come from far and near to buy from me. That has been our family business over the years.

“As I was discussing with the buyers and presenting the kola nuts I served to welcome them, shortly into the discussion, we started hearing sporadic gunshots renting the air almost in front of our family compound, from across the main road.

“I stood up to go out and see what was happening but my wife restrained me, saying that the gunmen are shooting our cows; that I shouldn’t step out. Even my customers warned me against moving out.

“And before a twinkle of an eye, the gunmen had shot dead 22 cows. Among the cows, there were some I used to sell N700,000 each because of their huge sizes.

“There were some cows that ran into the bush with bullet wounds and they were later found or recovered from the bush. Eight of them that sustained gunshot wounds later died. My dear, misfortune has really befallen me,” he said.

Onyeador said shortly after the violent operation by the gunmen, the SPA to Governor Ifeanyi Ugwuanyi, made some contacts with security operatives who later came to inspect the scene of the crime.

He said a team of soldiers from the 82 Division of the Nigerian Army, Enugu was the first to visit the place.

The team later held a security meeting in his palace at Ibeagwa-Nike where it was decided that a formal letter would be written to the state government concerning the ugly development.

“The following day, January 20, men of the DSS came with personnel of the Mobile Police Force. They all interviewed me and I told them how it happened. They said they will work on it,” he said.

Onyeabor recalled that in 2013, a band of cattle rogues had in the dead of night stormed his mini-ranch within the family compound and stole 35 cows.

Onyeador said the most painful part of the attack was the cruel murder of his herdsman Alarabe, who he said did not resist them, yet they killed him.

He said: “They killed Ogbodo; he was given an Igbo name as an indigene because he had spent 20 years serving us even during the days of my father.

“If he were alive today, you wouldn’t be seeing these cows in the ranch. He would have taken them to the bush where they would graze.”

According to Onyeabor, Alarabe hailed from Kwara State but his father migrated from Niger Republic.

“Alhaji Ibrahim Taiwo, who is living in Shaki, Oyo State, was the person that connected him to us.

“Alhaji Taiwo was the person who was doing business with my father before I was introduced to it.”

Ogbodo died a Muslim married to two wives and had several children, Onyeabor said, adding that relevant contacts had been made.

He said: “The relations of the deceased, those in Shaki, Oyo State have communicated with the Muslim here to bury Ogbodo. And that they would still come to console me for the tragedy that occurred. I am just handicapped now.”

He said he was saddened by the death of Ogbodo.

“I was told that he was telling the gunmen that he was not the owner of the cows; that Peter Nweke Ogbede, Chukwuani Onyeabor was the owner but they still killed him. They shot him at very close range and he died,” he said.

Onyeabor said he could not understand what the present generation is degenerating to compared to the days of his grandfather and even his father when honesty and truth were the order of the day.

“At a time, I had over 200 sheep here. But now I have no sheep because of theft. There is hunger and society is bad now. This is unlike when my parents were doing the business. In those days, people were content with what they had.

“We used to travel to Maiduguri and other places but I no longer travel. I only use my phone and the banks to transact the business. The next thing a trailer would bring the cows. I hardly travel to the North these days,” he said.

But why does he think he is often a target for rogues and outlaws?

“Go round the community and ask people about me. I am a peacemaker and I help people here. Anyone whose father dies and he doesn’t have money to buy a cow; if such a person approaches me, I would sell to him on credit. That was the practice of my great grandfather, grandfather and my father,” he said.

A former staff of the Nigerian Ports Authority (NPA), at Onne in Rivers State, Onyeabor decided to leave his job to join the family business full-time soon after his father’s death.

“I used to work as a civil servant with the Nigerian Ports Authority (NPA) specifically at Onne Wharf, in Rivers State. But because my father died I left the job to join the “throne”, that’s our family business,” he said.

In an interview with Daily Trust, the Zonal Chairman of Miyetti Allah Cattle Breeders Association of Nigeria (MACBAN) in the South East, Gidado Siddiki, described the killing of Alarabe as an unprovoked attack.

“We are law-abiding citizens and we strongly condemn what is happening to our members. Our people are being killed and little or nothing is being done to protect them.

“While we always caution our members against doing anything against the law, we also force them to pay compensation when they do something wrong like encroaching into farmlands. Sadly, this is not the case when our people or our cows are killed.

“We, therefore, call on the federal government to seriously intervene,” he said.

He also called on relevant security agencies to bring the perpetrators to book.

Breaking:Emir Of Moriki Is Dead