ESN Operatives Arrested In Orlu Are Hoodlums, Will Be Treated As Murderers —Imo Government 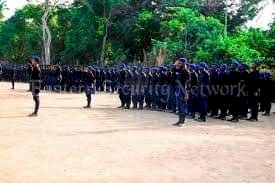 The Imo State government had invited the military to flush out the hoodlums who call themselves ESN in Orlu.

The Imo State Government says it will arraign suspected operatives of the Eastern Security Network arrested in the Orlu-Orsu area of the state for murder.

The state Attorney General and Commissioner for Justice, Cyprian Akaolisa, disclosed this to journalists on Friday.

Akaolisa described the suspected ESN operatives as hoodlums, saying they will be treated as murderers by the state government.

“The Imo State government invited the military to flush out the hoodlums who call themselves ESN in Orlu,” he said.

According to him, the leader of the Indigenous People of Biafra (IPOB), Nnamdi Kanu, is endangering the lives of the people of the state by the activities of ESN in the Orlu area.

Akaolisa who listed how many people the ESN personnel had allegedly killed in the state since 2020, said that the proscribed organisation (IPOB) cashed in on the #EndSARS protest last year to amass rifles for its operation.

He commended the Nigerian government for deploying troops in the area to secure the inhabitants.

He accused a former governor of the state, Rochas Okorocha, who now represents Imo West at the Senate, of allegedly playing politics with the crisis.

Kanu, IPOB leader, had on December 12, 2020, launched the ESN, saying the regional security outfit, just like Amotekun in the South-West, would help to tackle crimes and criminalities.

He had also said the ESN would rid the South-East of Fulani herdsmen said to be killing, raping, and kidnapping people in the region.

In the last week of January 2021, there was a crisis in Orlu after a clash occurred between ESN officers and soldiers, which resulted in the deaths of some people.

About four soldiers reportedly died during the clash along with five civilians, including a middle-aged woman, said to have been killed in the crossfire.

The affected soldiers were said to have been drawn from the 34 Artillery Brigade in Obinze.

Kanu later urged members of the ESN to observe a cease-fire and return to the forests.

Owners Of 100 Trucks Of Onions Boycott Shasa Market, Leave Sokoto For Other Countries

THE “ZABARMARI” MASSACRE IN BORNO STATE: ONE KILLING, TOO...