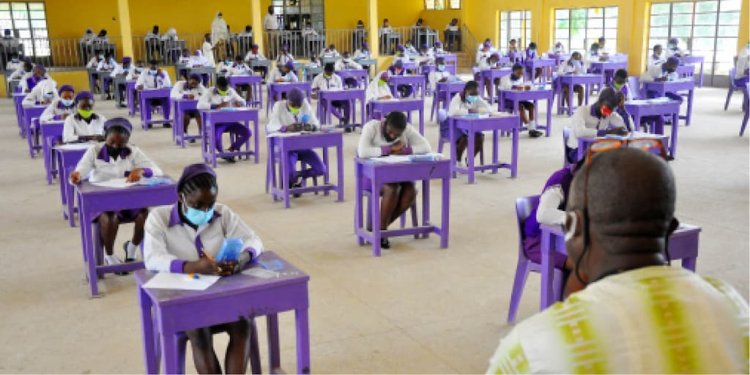 MURIC Director, Prof. Ishaq Akintola, made the allegation in a statement he issued on Tuesday.

He said the development gave Christian candidates an edge over their Muslim counterparts and put Muslim candidates at disadvantage as they are certain to miss those questions, even as they were also made compulsory.

“Our office has been inundated by reports of strange questions in a general paper set for the Lagos State Primary Six Placement Test into JSS 1 in Lagos secondary schools held on Saturday, 23rd July, 2022. The reference number on the question paper was LSA/PT/2022.

“Although the paper was captioned English Studies/Verbal Reasoning/General Paper, questions 12 and 14 were from the Bible and only Christian candidates could have made head or tail of them. These two questions were designed for Muslims to fail,” Akintola said.

According to him, the questions were designed to upset Muslim students and make them lose confidence in themselves thereby leading to confusion, frustration and ultimate failure.

“The caption of that paper should have been ‘Common Entrance in Lagos State…Muslims Come and Fail’. Question number 12 which is an objective, says, ‘Paul was born in a city called …Tarsus…Jerusalem…Jordan…Bethel. Candidates were expected to pick one of the four options. But how on earth is a Muslim candidate expected to know what to pick?

“This is parochial, provocative and unacceptable. This is another proof of the Christianisation of the education sector in Lagos State. How can anyone defend this? It is scandalous. Who set these obnoxious questions? Who proofread and supervised the examination? Who approved the questions? Heads must roll,” Akintola said.

He lamented that this was not unexpected especially that all the six tutor generals in the state are Christians and the state government refused to listen to appeals from Muslims to stop its exclusivism.

He said, “We had three Christians and three Muslims in the days of Asiwaju Bola Ahmed Tinubu and Raji Fashola. Muslims were removed under Ambode and the incumbent has refused to listen to complaints from the Muslim Community.

“The Muslim candidates have been put on a tight rope because the instruction on top of the question paper says ‘Attempt all questions.’ This means that anyone who jumps those two biblical questions does so at his or her own risk.”

He also said that Lagos Muslims pay tax like their Christian counterparts, wondering why they are being “relegated as third-class citizens”.

Editor’s note: This picture was used for illustrative purposes

THE JOINT MISSION REQUESTS THE END OF THE BLOCKING OF CELLOU...