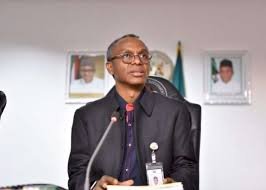 The Kaduna State Governor, Mallam Nasir el-Rufai, on Tuesday, held a closed-door meeting with traditional rulers as well as heads of security agencies over insecurity in the state.

The emergency meeting which was held at the Sir Kashim Ibrahim Government House, Kaduna, had in attendance, heads of the military, police and other security agencies in the state, along with local government chairmen and district heads of communities.

Recall that the state in recent time had a resurgence of violence characterised by kidnapping and banditry , while there was an attempted suicide attack on the Living Faith Church (Winners’ Chapel), in Sabon Tasha, in the Chikun area of the state.

The governor was said to have presided over the meeting which also had in attendance, the Deputy Governor, Dr. Hadiza Balarabe.

The state Commissioner for Internal Security and Home Affairs, Mr Samuel Aruwan, said, “Several resolutions were reached at the meeting for immediate action.

“The governor tasked the district heads to mobilise their communities to exercise vigilance and to support the security agencies with timely information.”