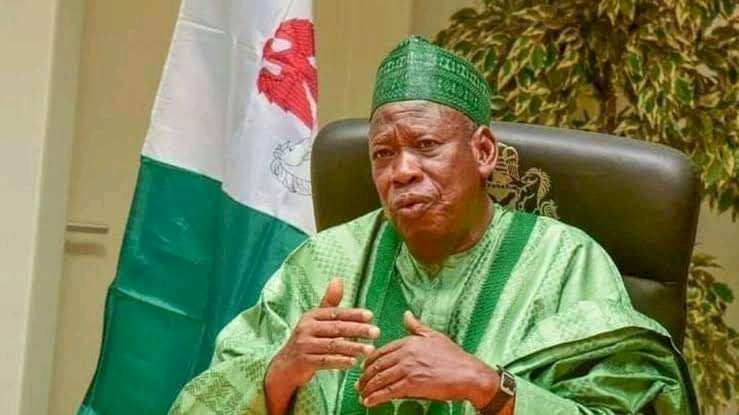 Governor Abdullahi Umar Ganduje of Kano State has on Monday appealed to media editors not to join in beating drums of war for the breakup of the country.

Ganduje made the appeal while declaring up the 2021 Biennial Convention of the Nigerian Guild of Editors taking place in Kano.

The Governor said some media organizations in recent times has crossed redlines and has impacted on the nation’s unity, harmony and integration.

According to him, “It is very important at this time that we should use the media for the promotion of peace and stability and change the viewpoints that could alter public views and sentiment toward a more peaceful resolution of our multifaceted current crises. If and only if we as a nation are interested in peace and harmony, we must reject hate propaganda machinery. In the main, this is a time Editors should be conflict-sensitive about our nation.

“In other words, I have a feeling that the crossing of redlines by some media organisations in recent times has impacted on the nation’s unity, harmony and integration.

“Our brave, collective pursuit in uniting this nation, underscores the fact that for as long as we have a common purpose, we will find no obstacle big enough to stop us from marching on. The media and particularly our gatekeepers have a role to play in this regard.

“Besides, this is a time the Editors should exercise the social responsibility you have to your country. Even if the governing authorities in Nigeria are encountering challenges in their strategy to develop the country, it is not enough to join in some fervent advocacy that seeks to beat drums of war to break up this country. I would like to appeal to you the Gatekeepers note that there is already some groundswell of opinion, which seems to be building some consensus on the expediency of restructuring the nation. That advocacy should not be confused with rebellious acts of some elements who would like to destabilise our great country.

“The media has a great role to play here in setting agenda for nation building. So, some ignorant and reckless commentators in your midst should be very careful in exercising freedom of speech at this time. That freedom can’t be exercised without some (social) responsibility,” he said.

The Governor continued when he said, “Freedom of the press and observance of press professional conduct are measured as indices of development in any country. Based on my understanding, the Nigerian press is one of the freest, in global context but some obvious professional misconduct in the media has curiously become excessive, in this regard.

“I believe that absence of an influential Press Council that should regulate the print media, specifically has become an institutional weakness that should be tackled without delay. All controversies and litigations that have stalled the emergence of a respectable Press Council should be handled with care. There is therefore a sense in which we can say that the world over, self-regulation is not enough for any professional bodies. The question is; who watches over the watchdog too? You can see clearly that the National Broadcasting Commission (NBC) has made some difference in regulating broadcasting, no matter our criticisms of the regulatory body, which even major broadcasters apologized to the other day,” Governor Ganduje stated.

Earlier, the Senior Special Assistant, Media and Publicity to President Muhammadu Buhari, Garba Shehu reminded the media of it role in social cohesion and safeguarding national security among others.

Shehu said, “As the link between the people and the govt, the citizen faced with challenges need to be reassured that the government at various levels are working very hard to secure them and make them feel safe and stop the nonsense of the banditry and kidnapping in the midst of killings that we are witnessing.

“I think it is time we look inwards and see how we can help stop the spread of fake news, negativism and rumour.

“I think this is the opportunity to remind ourselves of our responsibility to improve social cohesion, safeguard national security in the country,” Shehu said.

By 2022, each Nigerian state will have 1 Emergency Communications Centre – Pantami

Scrapping NYSC Not In Interest Of Nigeria’s Unity – Sultan

Video: we are one people don’t associate every crime to...