Buratai Instructs Troops To Be Ruthless With Bandits, Other Criminals 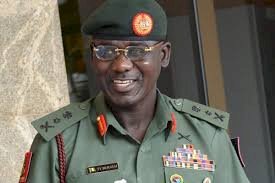 The Chief of Army Staff, Lieutenant General Tukur Yusuf Buratai, on Saturday, charged troops of Operation Sahel Sanity to deal with bandits and other criminals ruthlessly.
He said that the military would not give a breathing space to all criminals.

Buratai, who spoke at the Army’s Super Camp in Faskari local government area of Katsina State on a visit to assess the ongoing Operation Sahel Sanity in the Northwest, said the military had the capacity to deal with bandits and restore law and order in the Northwest and Nigeria by extension.

He appealed to the general public to stop shielding suspected criminals, saying they would one day turn against the very people shielding them.

“Criminals are within the very people seeking for protection and they have cousins, sisters, brothers and other relatives because they are not falling from the skies.

“The sooner people stop shielding these criminals, the better we get all the security challenges in our societies resolved.
“Notwithstanding, we have improved in the art of our intelligence gathering and people are becoming more supportive.

“That is why we were able to make dozens of arrests of the suspected criminals.
“If the people are in doubt as to whether they should exposed the criminals living among them, they should feel free.

“The criminals will turn against their brothers and acquaintances one day.

“They (criminals) move around and for our societies to be secured, they should be exposed,” he said.

‘We are making progress’

On the progress of Operation Sahel Sanity in the northwest, Buratai said tremendous success had been achieved.

He said that gun-running, cattle rustling and kidnapping have been considerably tamed in the region.

He, however, said operation of that magnitude was not entirely without some challenges.
He said inaccessibility of some rough terrain occasioned by rainfall was one of the major challenges of the operation, adding that numerous solutions to the problems had been proffered.

Buratai said the operation that started on 6th July, and that was to be completed in September, had been extended to December 2020, adding that the military would not relent until the region is rid of bandits and other criminals.

“I’m very happy with level of success recorded so far.

“The region will soon be freed of all forms of crimes, especially kidnapping, cattle rustling and armed robbery.

“The military and other sister security agencies are doing their best,” he added.

Sidya Touré recovered his passport: The opponent flew to...