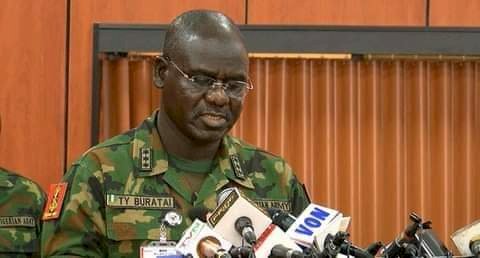 Even as they are under investigations by the International Criminal Court (ICC) for possible war crimes, the Chief of Army Staff, Lt. Gen Tukur Yusuf Buratai, yesterday, urged troops fighting against Boko Haram/ISWAP terrorists in the North- East not to be deterred, but redouble their efforts and fight on to secure Nigeria and her people.

The COAS, who spoke from self-isolation after being exposed to a general who reportedly died of Covid-19 last week, forcing the authorities to stop midway the Annual COAS Conference,  charged the troops to be guided by the Constitution of the Federal Republic of Nigeria, the Rules of Engagement, the Code of Conduct and the Standing Operating Procedures for all Nigerian Army Operations.

ICC Prosecutor Fatou Bensouda had  said, on Friday, she had enough evidence to open a full probe into continuing violence in Nigeria by Boko Haram fighters and security forces, believing that members of the Nigerian security forces had also committed crimes.

“This included murder, rape, torture and cruel treatment, as well as enforced disappearance and forcible transfer of the population and attacks directed at civilians,” the ICC chief was quoted as saying.

Bensouda’s office has been reviewing the conflict between government forces and Boko Haram and its various splinter groups since 2010.

Describing the action of the ICC as wicked, unnecessary distractions, he emphasized that troops should  fully concentrate on the final defeat of Boko Haram/ISWAP terrorist group.

A statement by the Acting Director, Army Public Relations, Brig General Sagir Musa, said, “The Nigerian Army’s attention has been drawn to a press release by the Prosecutor-General of the International Criminal Court (ICC) on Friday, December 12, 2020, alleging that she has found a reasonable basis to believe that  ‘members of the Nigerian Security Forces (NSF)’  have committed acts constituting crimes against humanity and war crimes.

“This was immediately followed by a release by the local branch of Amnesty International (AI) in Nigeria demanding full investigation of atrocities by Nigerian forces. There is no doubt such statement and instigation can distract the Nigerian Army troops with its demoralising effects.

“It will have negative consequences on troops morale, interest in military service by Nigerians and severe set back to all our internal security operations in the country.

“However, the Chief of Army Staff (COAS), Lieutenant General TY Buratai, enjoins Nigerian Army troops to ignore the distractions  and call on the gallant troops never to be worried or demoralized by these moves.

“The COAS, who is currently in self-isolation as part of precaution against the COVID-19, would soon be joining our gallant troops in the North East at the end of the mandatory isolation period to continue giving the desired leadership and support to the gallant and patriotic troops of the Nigerian Army.

“Our professional conduct over the years and most recently during the #ENDSARS protest at Lekki Village near Lagos are clear testimonies to the Nigerian Army’s posture on promoting sustainable human rights policy’.

I’ll Knock Him Out Inside Three Rounds’: Fury Wants To Fight Joshua Next