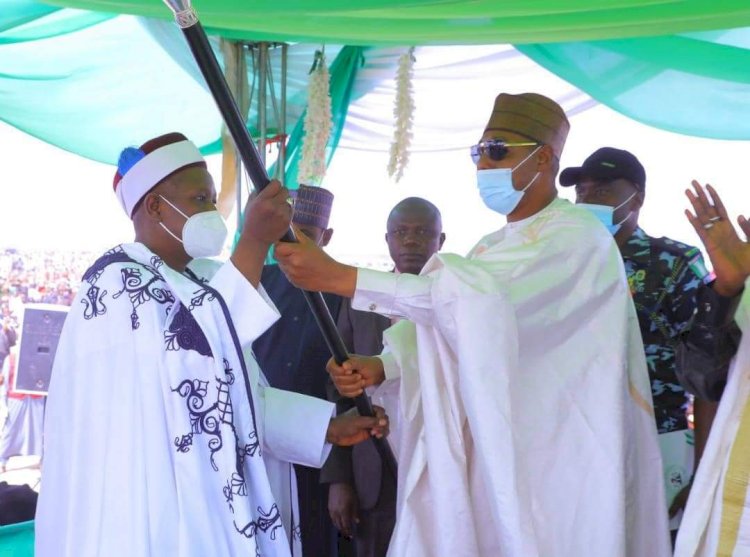 This was made known by the Commissioner for Local Government and Chieftaincy Affairs, Sugum Mai Mele during the presentation of staff of office to the Emir of Biu, Mai Mustapha Umar Mustapha by Governor Babagana Umara Zulum on Saturday in Biu town.

The commissioner said much was expected from the traditional authorities in the efforts designed to combat insurgency who should encourage people to share credible information with relevant bodies.

He further stated that the Emir was expected to discharge his duties without prejudice and outlined responsibilities to include, “Settlement of disputes without sentiment, maintenance of law and order, preservation and strengthening of cultural heritage within the domain, presiding over the council meetings and other engagements as well as fatherly advice to the local government council.”

Also, in his remarks, Governor Babagana Zulum said the selection of the Emir in September 2020 was peaceful and devoid of rancour and that he had no reservation in working with the emirate council in the selection process which

He enjoined the Emir to offer quality leadership to his people, promote education, health and agriculture as well as maintain the legacies of his father, late Emir Mai Umar Mustapha Aliyu.

He said, “You are expected to be fair and just and carry everybody along.”

Zulum asked the new Emir to strengthen community policing with a view to promoting peace and harmony even as he called on traditional rulers in the emirate to rally round and support him.

The governor told the Emir to avoid partisan politics.

In his acceptance speech, Emir Mustapha urged youths to acquire education and promised to strive hard to address violent behavior in young people.

THE STORY OF SULAIMAN BOGORO THAT ABOUNDS, WORTH NOTE FOR AN AWARD BY COMRADE UMAR...