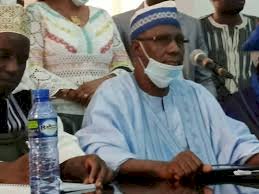 Sékou Ba (born May 3, 1955) is a political Burkinabé who was Minister of Animal Resources for the government of Burkina Faso from July 2007 to April 2011.

He is a member of the Congress for Democracy and Progress (CDP).
Ba was born in Kampti, located in the province of Poni. After attending school in Bobo-Dioulasso, he continued his studies at the University of Dakar in Senegal and then in France. Back in Burkina Faso, he was in charge of studies at the Ministry of the Directorate of Economic Promotion for the control of State companies from 1984 to 1986.

He was then head of the department at the Directorate for the control of State enterprises from 1988 to 1990, Director general of the Faso Fani plant 1990-1992 and director of the inspection of public and parapublic enterprises from 1992 to 1993. After having served as Secretary General of the Ministry of Commerce and Industry and Mines from 1993 to 1995, he was Chairman of the Privatization Commission from 1995-1997 and Director General of the National Office for Foreign Trade 1998-2006.

Ba was appointed to the government on January 6, 2006 Minister of Housing and Urban Planning. Following the May 2007 parliamentary election, he was transferred to the post of Minister of Animal Resources on June 10, 2007.

Ba is a member of the ruling CDP National Council. He was also Secretary General of the Economic and Development Commission of the CDP, then as Vice-President of the same Commission.

Breaking news: The 8th anniversary of the  Fulbe Africa...