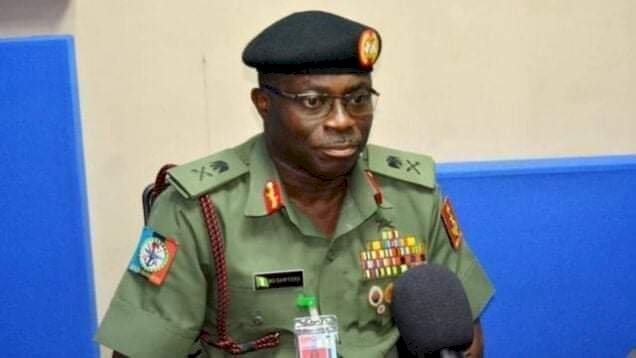 The Director Defence Information, Maj.-Gen. Benjamin Sawyerr, says the Armed Forces in the leadership of Gen. Lucky Irabor, will not allow Nigeria to disintegrate.

Mr Sawyerr stated this when he paid a courtesy call on the Managing Director, News Agency of Nigeria, NAN, Buki Ponle, on Thursday in Abuja.

He said that the Armed Forces is committed to ensuring national security, peaceful coexistence of all Nigerians, economic development, political and social cohabitation.

He said that the media is key in tackling the security challenges.

He also said that information management in times of crisis is vital.

“We at the Armed Forces of Nigeria are the institution that holds this nation together.

“Any where you see a failed state is because the Armed Forces has collapsed.

“I saw it in Liberia, I saw it in Sierra Leone and I can assure you that with the lesson we have seen in the past, the Armed Forces of Nigeria under the leadership of Gen. Irabor will never allow Nigeria to collapse.

“The crop of officers working under him are committed to national security, peaceful coexistence of all Nigerians, economic development and political and social cohabitation.

“So, we know and identify the importance of the media,” he said.

Mr Sawyerr said that the visit was premised on the belief that NAN has widest reach of passing information round to all media houses.

He said that the visit was to thank the management of NAN and to further strengthen the existing relationship between the agency and the Armed Forces.

“I must say that NAN has been doing credibly well in this aspect by churning out genuine news.

“I want to assure you that whatever thing we serve you will be credible and timely.

“When we hold on to news, it is for the interest of national interest but we will always keep you abreast,” he said.

The Managing Director of NAN, Buki Ponle, assured Sawyerr that NAN would continue to support the Armed Forces by presenting credible news in the interest of the nation.

Mr Ponle said that NAN had been known for solution journalism, adding that tackling the current security challenges such as insurgency, banditry and other forms of criminality, required public support.

He expressed confidence that the military would be committed to keeping the country united.

“I believe that sooner or later, the war against insurgent will be a thing of the past because we have a capable Armed Forces.

“I appeal to our media colleagues to consider the country first and foremost and I’m optimistic that we will overcome this phase,” he said.

Mr Ponle also commiserates with the families of the fallen heroes who had sacrificed their lives in defence of the country.

He said that Nigeria had what it takes to emerge stronger from the current security situation.