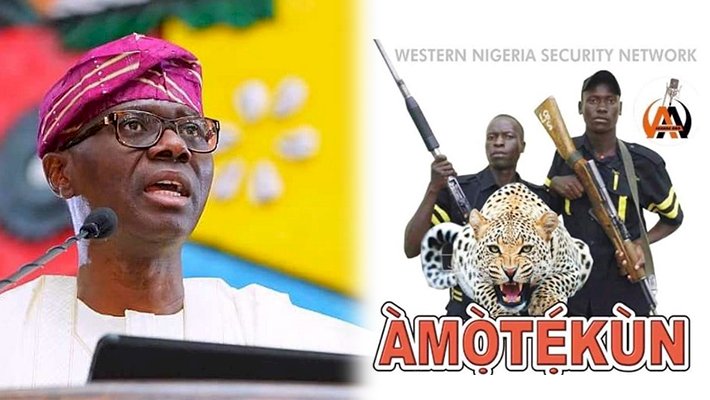 Amotekun was established on January 9, 2020, by the six South-West states. All except Lagos had inaugurated the security outfit.

“So it’s just a name change in the case of Lagos. I appreciate what my colleague governors are doing, and they also appreciate the peculiar nature of Lagos,” Mr Sanwo-Olu stated. “I have got over 7,000 neighbourhood watch personnel in Lagos, who are doing exactly the same thing that we have Amotekun doing.”

The LNSC is a uniformed security agency established by a law of the Lagos State House of Assembly in 2016 to assist the police and other security agencies in maintaining law and order in the state. Its officers operate in the 57 LGA and LCDA in Lagos.

According to the Lagos government, the LNSC officers are locals from the various LGA and LCDA where they operate, a deliberate policy to use their local knowledge to achieve “maximum grass root” intelligence gathering and community policing.

Mr Sanwo-Olu added, “They are there at the border post giving us daily monitoring in their localities and feeding it back to the central. They are the ones feeding us with information. But they cannot carry arms and prosecute people.”

Apart from community policing, the governor explained that the LNSC also engaged in border patrol.

“The borders that I have in Lagos are outside of the Atlantic Ocean is Ogun state,” he said.

The origin of the LNSC can be traced to the military administration of Brigadier Buba Marwa, who, on October 20, 1996, established Neighbourhood Watch outfits by edict Number 12 and published in the official gazette No 34 Vol. 29 (October 29, 1996), according to information on the Lagos government’s website.

The Lagos State Neighbourhood Safety Agency said, on its website, that the establishment of “Neighbourhood Watch” was to complement police’s efforts at the grassroots level.

It explained further that former Governors Bola Tinubu and Babatunde Fashola provided 33 Neighbourhood Watch posts with 33 repeater and base stations, patrol vehicles, defensive gadgets, and training during their tenures.

In September 2016, then-Governor Akinwunmi Ambode enacted and gazetted the law to establish the Lagos State Neighbourhood Safety Agency to “transform the unit into a full-fledged agency.”