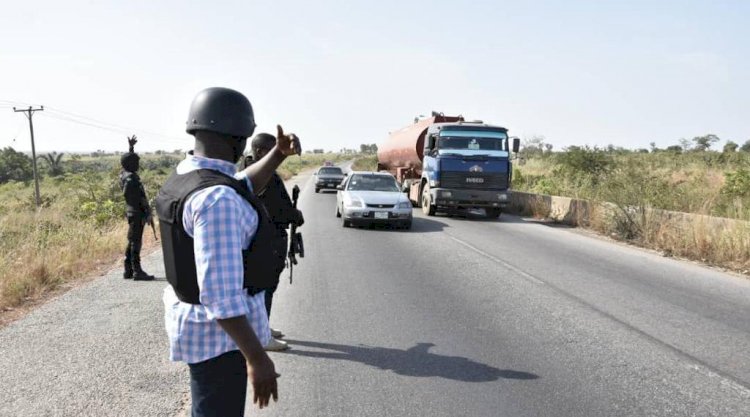 The troops were seen carrying out security checks and also ensuring free flow of traffic on the Kaduna-Abuja road.

A joint security team comprising the police and military on Thursday patrolled the notorious Kaduna-Abuja road, where many Nigerians have been abducted by bandits in recent months.

In pictures sent to PREMIUM TIMES by the commissioner, on Thursday, the troops were seen carrying out security checks and also ensuring free flow of traffic.

The official denied reports that the road had been deserted by travellers for fear of being kidnapped.

“Contrary to reports, Kaduna State Government can authoritatively confirm that motorists and travellers are plying the Kaduna-Abuja Road which cuts across Chikun, Kachia and Kagarko local government areas of the state,” he said.

“Vehicular movement is active on the double lane road, as commercial activities are also visible in local markets in Akilubu, Rijana, Kateri, Jere, Doka, Sabon Gayan and other communities surrounding the main road,” he said.

Mr Aruwan also said the state government’s team and the coordinator of OPTS, Ibrahim Gambari, “have been touring the route soliciting support for security agencies”.

“We are here to solicit your support for the troops and personnel working on the Kaduna-Abuja road and the general area. Credible information is key. With actionable intelligence, security agencies can get ahead of the bandits.

“As you are all witnessing, troops have been taking the battle to the bandits and this is made possible because they got credible intelligence. So, please cooperate with them and support them so that we will get it right and maintain security on the road,” he added.

The activities of bandits, who kidnap for ransom, have made the road and parts of the North-west dangerous for travellers in recent months.

PREMIUM TIMES recently reported how police officers on a special assignment were kidnapped in Katsina State and are currently being held for ransom.

The officers were on their way to Zamfara State from Borno to carry out a special assignment before they were abducted.