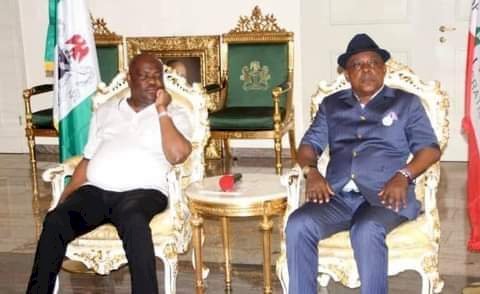 Although the 2023 presidential election is still years ahead, a fresh crisis is brewing in the Peoples Democratic Party (PDP).

Since 2015 when the All Progressives Congress (APC) ended its 16-year dominance, the PDP has made futile attempts to reclaim the presidency.

Ahead of the 2023 elections, there are indications that the issue of zoning is tearing the party apart.

There have been different agitations on where the presidential ticket of the party should be zoned to and all eyes have been on the national working committee (NWC) led by Uche Secondus, national chairman of the party.

When Secondus met with journalists in Abuja on Thursday, he was asked to comment on zoning but the PDP chairman simply said: “We can’t be talking of zoning when we have not appraised how we fared in the last election.”

One day after the remarks, Nyesom Wike, governor of Rivers state, tackled him, saying the chances of the PDP reclaiming the presidency in 2023 are being threatened under the national working committee he leads.

Wike, who played a significant role in the emergence of Secondus, accused the party’s NWC of “sowing the seed of discord” among governors in the party and barely showing interest in the next presidential election.

According to Kelvin Ebiri, his spokesman, Wike made the accusation during a television programme in Port Harcourt, the state capital.

“PDP ought to have harvested from the inefficiency of the APC; from the maladministration of the APC. Ordinarily, that is what opposition party ought to do,” he was quoted to have said.

“If you ask me, are Nigerians waiting for a change? Yes. If you ask me as a member of PDP, I am ready to support PDP to takeover, yes. But, if you ask me currently as it is, is the leadership of the party willing for us to harvest this opportunity for a change? I will say no.

“An a party that ought to be united, to work, to take over the affairs of government, because people are waiting for this opportunity.

“But the current leadership of NWC is not prepared for that, rather, what they have done is to constitute some people to sow a seed of discord among governors for their own selfish interest. And that will boomerang; that will consume them.

“The present National Working Committee is not interested or doing anything to take over the realms of government in 2023. When your interest is to remain in power, you are no longer interested to win election.”

There are reports that Wike is working for the emergence of Aminu Tambuwal, governor of Sokoto state, as the PDP presidential flagbearer so that he can run as the vice-presidential candidate.

Tambuwal was one of the aspirants who sought the 2019 presidential ticket of the PDP but lost to Atiku Abubakar, former vice-president.

After the loss of Tambuwal, Wike had withdrawn his support for the party but PDP leaders reached out to him before the situation was resolved.

Commenting on the crisis brewing between Wike and Secondus, a PDP chieftain, who pleaded anonymity, said: “Secondus comment on zoning is against Wike’s VP bid. Wike believes that if the presidency is zoned to the north, Tambuwal would mobilise northern numbers against APC’s southern candidate.

“But if the ticket is zoned to the south or thrown open, he might not get a chance.”

Ike Abonyi, Secondus spokesman, was not available for comments as of the time this report was filed.

Kola Ologbondiyan, national publicity secretary of the PDP, did not also respond to calls or the text message sent.

The development adds a new twist to the crisis currently rocking the party as it battles to consolidate its structure in various parts of the country, including in the south-east where David Umahi, governor of Ebonyi and chairman of the region’s bloc of governors, defected to the APC.