War crimes in the Central African Republic: a former officer arrested and imprisoned in France 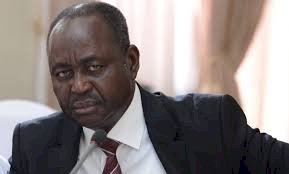 A former guardian of the deposed Central African President François Bozizé (2003-2013) was indicted on Friday evening September 18 in Paris, in particular for “complicity in crimes against humanity” and “complicity in war crimes” , then locked up.
Arrested Tuesday in eastern France, Eric Danboy Bagale, a 41-year-old Central African, was also indicted for “acts of torture” and “criminal association with a view to preparing a war crime”, for facts committed between 2007 and 2014 “as head of the presidential guard (…) then as head of anti-balaka militias,” said the National Anti-Terrorism Prosecutor’s Office (PNAT) in a press release.
Eric Danboy Bagale was arrested and taken into custody on Tuesday, September 15, by the Central Office for the fight against crimes against humanity, genocides and war crimes (OCLCHGCG) and the research section of the Besançon gendarmerie . “This is the first indictment in proceedings initiated by the PNAT concerning acts committed in the Central African Republic,” the statement said.
The arrest was ordered as part of an investigation opened in May 2017 and now entrusted to specialized investigating judges from the Paris court. French justice has taken up this case under universal jurisdiction, which authorizes it to prosecute suspects of war crimes or crimes against humanity if they pass through or reside on French territory.

Senior official in the anti-balaka militias

The name Eric Danboy Bagale appeared among the “Liberators”, the name given to General Bozizé’s comrades in arms who brought him to power in 2003, by overthrowing President Ange-Félix Patassé. A member of the Gbaya ethnic group, like Mr. Bozizé, the officer had become a senior official in the anti-balaka militias. These armed groups were formed to fight the Seleka militias, an alliance of rebels from the predominantly Muslim north of the country, who ousted President Bozizé from power in 2013.
The numerous massacres perpetrated by both sides plunged this country, among the poorest in Africa, into the third civil war in its history. According to the United Nations, which has accused the two coalitions of war crimes, between 3,000 and 6,000 people died, mostly civilians, between 2013 and 2015.
Read also Repeated killings in the Central African Republic
The World with AFP